'We didn’t shoot for the stars': French president Emmanuel Macron admits EU failures on vaccines after chaotic roll out

After months of pointing the finger elsewhere, the French president has finally admitted that the EU failed on vaccine procurement

The news comes as the continent is gripped by a deadly third wave of the virus, which the World Health Organisation (WHO) has described as one of the worst situations globally.

END_OF_DOCUMENT_TOKEN_TO_BE_REPLACED

"Everybody, all the experts, said: Never in the history of mankind was a vaccine developed in less than a year," Macron told Greek television channel ERT.

“We didn't shoot for the stars.

“That should be a lesson for all of us.

“We were wrong to lack ambition, to lack the madness, I would say, to say: It's possible, let's do it.”

The president praised the US for their roll out, but noticeably stopped short of lauding the UK - its neighbour - on theirs, which has been more successful.

"We didn't think it would happen that quickly...

“You can give that to the Americans, as early as the summer of 2020, they said: let's pull out all the stops and do it,” he said. 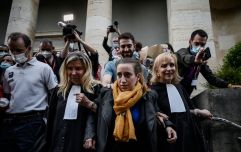 French woman who killed her abusive husband won't be jailed

END_OF_DOCUMENT_TOKEN_TO_BE_REPLACED

“As far as we're concerned, we didn't go fast enough, strong enough on this.

“We thought the vaccines would take time to take off.”

His comments are particularly strange after he, along with the EU, accused AstraZeneca for months of not honouring its contracts on vaccines - placing the EU’s lack of vaccines at the company’s door.

Meanwhile, millions of jabs sat in fridges across the bloc unused, prompting the WHO to request the vaccines be sent to poorer countries rather than go unused.

Last month, Macron claimed the vaccine was “quasi-ineffective” on over 65s, then this month France - along with multiple other EU countries - suspended the roll out against the advice of the WHO over baseless claims of blood clots. 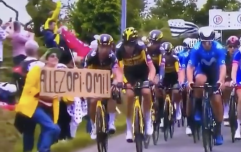 END_OF_DOCUMENT_TOKEN_TO_BE_REPLACED

After spreading this vaccine disinformation, the French government are encouraging all over 55s to get the vaccine, which comes amidst a study in the US which shows the AstraZeneca vaccine is actually more effective on over 65s.

And France, which already had a severe case of vaccine hesitancy among its population, has seen an 18 per cent increase in those viewing the AstraZeneca vaccine as unsafe since February - meaning a whopping 61 per cent of French people now believe the vaccine is dangerous.

Vaccine hesitancy is also up in double figures in Italy, Spain, and Germany.

Threats of bans on vaccine exports from the EU to the UK have also been thrown around by president of the European Commission, Ursula Von der Leyen, who has been palpably frustrated by the vaccine success in the UK.

“Nobody understands why we're witnessing such a stupid vaccine war,” he said

“This cannot be dealt with in a war atmosphere.

“We are not in war and we are not enemies, we are allies.

"We have special relations with Britain, there's room for dialogue.”

And prime minister Boris Johnson, in a joint UK - EU statement, said: "I don't want to see blockades of vaccines or of medicines, I don't think that's the way forward either for us or for any of our friends."

popular
Shipwrecked mum found dead saved her children by breastfeeding them at sea
The JOE Friday Pub Quiz: Week 261
Grimes says baby X Æ A-XII calls her by first name as she doesn't identify with 'mum'
'Gleeking' is the 'disgusting' bodily function that most people don't know they can do
Man eats ‘world's biggest burger’ in front of vegan protestors
Man has hand ‘chopped off at the wrist in London after vigilantes corner him’
Missing Instagrammer Gabby Petito's last text suggests 'she may have been 800 miles from last sighting'
You may also like
Sport
Rugby player claims he was called a 'banana eater' by opponent in French second division match
Sport
Drama in French camp as Rabiot's mother clashes with families of Pogba and Mbappe
Sport
Xhaka necks a bottle of Coke before penalty shootout victory against France
Sport
Roy Keane reserves special praise for Granit Xhaka after Swiss shock France
Sport
Roy Keane had plenty to say after France stunned by Switzerland
Next Page