He posted a video on his Instagram story which showed the singer applying a black dye or black paint to his tongue with a cotton bud.

Many of MGK's actions go unexplained, much like his decision to paint his tongue black, but his red carpet 'look' certainly attracted a lot of attention.

The singer posed with girlfriend Megan Fox before attending the Billboard awards. Megan posted a snap of the pair on her Instagram account, with the witty caption: "It's the broom for me."

I think it's fair to say the elephant in the room is her boyfriend's black tongue. 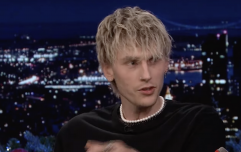 END_OF_DOCUMENT_TOKEN_TO_BE_REPLACED

MGK was also nominated for 'Top Rock Song', but he lost out to AJR's hit 'Bang!'

Some fans took to social media to say that they enjoyed the singer's bold look. On Twitter, one user said: "Society can't put machine gun Kelly in a box."