Lurpak spotted on sale for £9.35 in supermarkets - with security tags on packs

Do they offer 3-month plans on Klarna to spread the cost?

Shoppers have expressed their outrage after finding packs of Lurpak priced at just shy of a tenner at a leading budget supermarket.

END_OF_DOCUMENT_TOKEN_TO_BE_REPLACED

Britain’s largest dairy producer has warned grocery prices will continue to rise this year as the country faces the worst inflation in 40 years.

Arla Foods’ chief commercial officer Peter Giortz-Carlson, whose company sells Lurpak, Cravendale and Skyr, said he has “never seen anything like it” in his 20 years in the industry.

Speaking to Sky News, he said milk farmers are making a loss on farms due to the rising costs of fertiliser and fuel.

Simon Roberts, Sainsbury’s chief executive, has also warned that pressure on household budgets “will only intensify over the remainder of the year”. 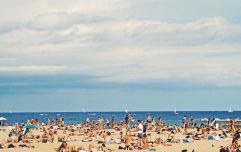 END_OF_DOCUMENT_TOKEN_TO_BE_REPLACED

“We really understand how hard it is for millions of households right now and that’s why we are investing £500 million and doing everything we can to keep our prices low, especially on the products customers buy most often,” he said.

Shoppers have been posting pictures of Lurpak in certain supermarkets, with one asking whether Klarna payments are being offered after finding a 1kg pack on sale for £9.35 at Iceland.

Sainsbury’s online and in store list a 750g tub for £7.25, while Asda has started to add security tags on their shelves.

This man's vision of the future doesn't seem that far off!

popular
Incredible case of the only known individual whose parents were two different species
Multiple fatalities after planes collide mid-air over airport
Andrew Tate banned from Instagram and Facebook
Former Playboy Bunnies detail what it was like having unprotected orgies with Hugh Hefner
Court hears cringeworthy poems Ryan Giggs wrote to his ex
Footage emerges of Andrew Tate getting knocked out during kickboxing bout
The JOE Friday Pub Quiz: Week 308
You may also like
Sport
Iceland fans praised for creating incredible atmosphere during Belgium clash
Food
Iceland shoppers can get items for just 1p if they're struggling before payday
Life
Woman tests positive for covid mid-flight, isolates for five hours in bathroom
News
Iceland boss says staff won't force shoppers to wear masks despite rules
News
Iceland boss points out UK has more food banks than McDonald’s branches
Next Page