Lord Buckethead is on Twitter and it's an absolute gift

The real winner of the general election.

Given that Theresa May plans on leading the Tories into a minority coalition with the DUP, there are still doubts about the stability of the UK's immediate political future. 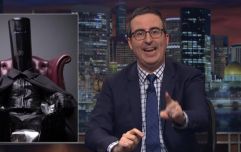 END_OF_DOCUMENT_TOKEN_TO_BE_REPLACED

The general election has seen a resurgence for Labour and while the Prime Minister maintains the support of her party, there's no denying that she's in an incredibly precarious position as the Brexit negotiations are about to begin.

Given the disastrous campaign that May ran, it's very likely that she runs the risk of being dispatched within her own party.

This being said, the general election saw certain candidates solidify their positions. For example, Jeremy Corbyn has quietened any opposition in the Labour party but his achievements pale in comparison to Mr Fishfinger and Lord Buckethead.

Regarding the 'Dark Lord of the Bucket', it's clear to see why 249 voters were inspired by his rhetoric.

Who wouldn't vote for policies like Ceefax to be brought back immediately, the nationalisation of Adele or legislation for the hunting of fox-hunters.

Lord Buckethead has been advocating social progress for months now and his Twitter account has some absolute gems.

See, he has empathy for Diane Abbott.

He's up to date with foreign affairs.

A Lord of the people.

We finally have photos of @LordBuckethead campaigning in #Maidenhead. They were worth the wait. pic.twitter.com/C0RP5Ky3oV

Fond of a pint.

All in all, he should be proud of that campaign.

popular
New video of Wayne Rooney on night of ‘stitch up’ pics emerges
Conor McGregor deletes disgusting tweet about Khabib's dead father
Man who claims he’s Charles and Camilla’s child is now using his son as ‘proof’
Filipino Olympic weightlifter will be given $660,000 and 2 houses for winning country's first gold
You won't get top marks in this spot the ball quiz
Police find 48TB of 'mostly adult' material in Shilpa Shetty's home after husband's arrest
Coleen Rooney vows to stand by Wayne after semi-naked hotel picture 'stitch up'
You may also like
Politics
How the Tories spent £18.5m losing their majority in the 2017 election
Politics
The Conservative party were spending £100,000 a day on Facebook advertising during the 2017 general election
Politics
In the digital arms race of modern politics, Theresa May is loading expensive blanks
Politics
Brits are in favour another General Election, according to new YouGov poll
Politics
Details of Theresa May's immediate reaction to election night results have emerged
Next Page