Hindsight's a fine thing isn't it

This is the difficult part now, the part where we all ask ourselves how we were so stupid to not predict it. As Kate Fleming herself said on Sunday night, he was hiding under our noses the entire time.

END_OF_DOCUMENT_TOKEN_TO_BE_REPLACED

No matter what your opinion on the Line of Duty finale, it's difficult to argue with the fact that very few people predicted that reveal. That it was Buckells all along. The one that seemed simply incompetent, the one that we all thought wasn't clever enough to be corrupt.

Yet all the signs were there. And they weren't just there in this series, the first hints at Buckells' bentness were there from the very start.

One Twitter user spotted a scene in series one of the police drama in which Buckells can be briefly seen going to play golf with the original big boss of the OCG, Tommy Hunter.

In fairness, it is a bit of a blink-and-you'll-miss-it moment, but it's clearly him. 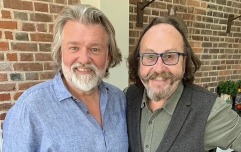 END_OF_DOCUMENT_TOKEN_TO_BE_REPLACED

If you want to find the clip for yourself, its at the 42 minute mark of episode 5 in the first series.

And there were plenty more clues scattered throughout series six. Golf has been a theme amongst the bent coppers in Line of Duty, with Matthew 'Dot' Cottan known as the Caddy whilst he was working his wicked ways from inside AC-12.

END_OF_DOCUMENT_TOKEN_TO_BE_REPLACED

We'd already had plenty of signs that Buckells was a golf fan, and in his first interview with AC-12 earlier in this series, there were a lot of things that smelt very fishy, but we all simply accepted them as Buckells' incompetence.

And, of all the senior police officers there, of course it would be Buckells who can't spell definitely.

We really should have seen it coming.