Lewis Hamilton is set to be knighted by The Queen in recognition of his record-breaking Formula 1 achievements, according to reports.

END_OF_DOCUMENT_TOKEN_TO_BE_REPLACED

Born and raised in Stevenage, this year he won his seventh F1 World Championship - equalling the record set by Michael Schumacher.

Hamilton is statistically the most successful racing driver in history, having recorded more wins, pole positions and podium finishes than any other driver.

He has achieved 95 wins, 98 pole positions and 165 podium finishes, placing the 35-year-old well above other icons of the sport in the record books.

Hamilton was recently awarded the 2020 BBC Sport Personality of The Year award. He has already been the recipient of an MBE, awarded in 2008, and is a Fellow of the Royal Society of Engineering.

He is set to become the fourth Formula 1 driver to receive a knighthood, following in the footsteps of Sir Jack Brabham, Sir Stirling Moss and Sir Jackie Stewart. 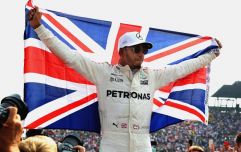 END_OF_DOCUMENT_TOKEN_TO_BE_REPLACED

Critics had previously taken aim at Lewis Hamilton due to his status as a tax exile, and the fact he has lived away from the UK for so long.

However, Prime Minister Boris Johnson is set to allow Hamilton's knighthood to go ahead, placing him on the Diplomatic and Overseas list according to the Mail.

This list recognises Brits living outside the UK who "have given exceptional service to the UK abroad and internationally".

This year, the 35-year-old has also been a vocal supporter of the Black Lives Matter movement, and has increasingly used his platform to raise awareness of racial injustice across the globe.

After the death of George Floyd, whose killing at the hands of police in Minneapolis sparked worldwide protests, Hamilton wrote: "I see those of you who are staying silent, some of you the biggest of stars yet you stay silent in the midst of injustice. Not a sign from anybody in my industry which of course is a white dominated sport. I’m one of the only people of colour there yet I stand alone."