Majority of northern Labour voters are in favour of a second Brexit referendum, poll finds

The vast majority favour a new vote after the party's recent policy switch, according to the research

The idea that Labour voters in the Midlands and north of England will not vote for Jeremy Corbyn now the party has backed a second Brexit referendum has been refuted by a new poll.

With many towns with Labour MPs such as Stoke, Burnley and Hartlepool voting to leave the European Union in 2016, some have suggested the party's U-turn on another vote as potentially damaging to their traditional base of support.

However a YouGov poll of 5,000 voters across those regions found that 75 per cent of people who supported Labour in the last election and who had a preference were back the party's move for a second referendum. In fact, 35 per cent said the decision made them view Labour more favourably.

It found that only 14 per cent of those who chose Labour in 2017 were unhappy with this latest policy switch, which followed on from September's party conference vote that pushed for a new vote. Delegates overwhelmingly backed "keeping all options on the table" and, with less than a month to the Article 50 deadline, Corbyn has now added his endorsement. 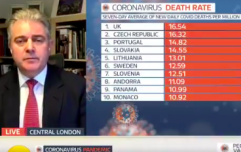 END_OF_DOCUMENT_TOKEN_TO_BE_REPLACED

"We will back a public vote in order to prevent a damaging Tory Brexit or a disastrous no deal outcome," he said last week.

The poll serves as another blow to Theresa May's withdrawal agreement as 69 per cent of those polled would choose remain in a second referendum, if the option was placed against her deal. When that hypothetical question pitched staying in the EU versus leaving on no deal, the figure in favour of remain rose to 72 per cent.

Another clear indicator as to how voters in the Midlands and north are responding to the Brexit negotiations is found in the 17 per cent who placed controls on immigration as more important than frictionless trade with Europe, which was preferred by 68 per cent.