The video has been circulated on social media

A video that appears to show British soldiers firing at a target of Labour leader Jeremy Corbyn has been confirmed as legitimate by the Ministry of Defence.

Sky News reporter Alistair Bunkall tweeted the footage, along with confirmation from the MOD.

Video has emerged of soldiers on a shooting range in Kabul firing at a target of Jeremy Corbyn. MOD confirms it as legit: pic.twitter.com/qOr84Aiivj

An Army spokesperson said "We are aware of a video circulating on social media, this behaviour is totally unacceptable and falls well below the high standards the army expects. A full investigation has been launched."

I’m told it happened in the last few days. Here is the MOD statement: pic.twitter.com/eOtYE6lZeX

A senior defence source told Bunkall that the video is "a terrible look". 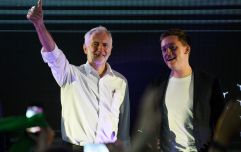 END_OF_DOCUMENT_TOKEN_TO_BE_REPLACED

Bunkall reports that the soldiers were firing simulated paint rounds, not actual bullets.

The footage was recorded in the loft of New Kabul Compound in Afghanistan, where soldiers do 'guardian angel' drills simulating the protection of VIPs. There are images of celebrities on the range, but they the VIPS to be protected, not to be shot at.

The video began circulating on social media sites, and appears to have originated from Snapchat.

Four soldiers are seen firing handguns at the target, which is then revealed to be a larget image of the Labour leader.

A caption on the video reads "Happy with that".