Due to a sharp drop in sales, the Wetherspoon chain revealed a  £105.4m loss in the year to July 26th.

In 2019, they reported a pre-tax profit of £95.4m - which shows the drastic effects coronavirus and lockdown have had on the pub trade.

Wetherspoon also revealed that sales had dropped by 30.6% to £1.2bn.

The report covers the first few weeks after pubs were allowed to reopen on July 4th.

The company said that like-for-like sales were now 15% lower compared to 2019, saying that there were "strong sales in the first few weeks, followed by a marked slowdown since the introduction of a curfew and other regulations."

861 of Weatherspoons pubs have now reopened.

The hospitality industry is due to come under even more pressure as lockdown restrictions tighten.


London and Essex will enter Tier 2 restrictions on Saturday, and Liverpool is already under Tier 3. Lancashire is also due to move into Tier 3. 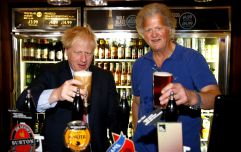 END_OF_DOCUMENT_TOKEN_TO_BE_REPLACED

Under Tier 2 restrictions, people cannot socialise inside with people outside their support bubble, meaning that they cannot meet people inside a pub or restaurant who they do not live with, or is in their bubble. The rule of six remains for pub or restaurant gardens.

In Tier 3, pubs and bars can only stay open as restaurants, and only serving alcohol as part of a substantial meal.

"I think you should concentrate on the basics which is social distancing. If you don't get too close to someone you won't get infected, that works better."

On Friday, rival pub chain Marston's confirmed that 108 staff had been made redundant from their head office.

You may also like
News
Marks and Spencer mocked for selling 'gentrified' chip shop scraps
News
Donald Trump says he'll 'kiss everyone in that audience' at campaign rally
News
Icelandic volcano that caused havoc in 2011 could erupt again, experts say
News
Billionaires have made £1.7 trillion since the start of the pandemic
News
University students hit with £10,000 fines after hosting house party
Next Page