Her family have been notified by her lawyer

The Home Office have informed the family of Shamima Begum, who fled Britain in 2014 to join Isis, that they intend to revoke her British citizenship. 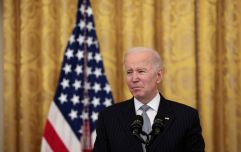 END_OF_DOCUMENT_TOKEN_TO_BE_REPLACED

In a statement posted on Twitter, Begum's lawyer, Tasnime Akunjee, said: “Family are very disappointed with the Home Office’s intention to have an order made depriving Shamima of her citizenship.

“We are considering all legal avenues to challenge this decision.”

Begum is currently in a refugee camp in Syria, where she gave birth to a baby boy, Jarrar, at the weekend.

She had requested to be allowed to return to the UK, claiming there is no evidence that she would potentially be dangerous, except for the fact that she joined Islamic State.

Sky News are now reporting that Begum can lose her British citizenship without Britain making her stateless, which would be against international law, due to the fact that she has dual citizenship with Bangladesh.

BREAKING: Sky News sources can reveal that British officials have been able to revoke Shamima Begum's citizenship because she was a dual national of British and Bangladeshi citizenship.

popular
Wagatha Christie: Wayne Rooney describes 'awkward' moment he asked Jamie Vardy to get his wife to 'calm down'
Johnny Depp's lawyers reveal poignant reason why actor refuses to look at Amber Heard in court
Awkward moment Piers Morgan is a called a c**t by a guest on his own talk show
Julia Fox says Amber Heard was not 'powerful enough' to abuse Johnny Depp - and people are divided
FootballJOE's Career Path Quiz: #6
UK’s Sam Ryder may have actually come third amid possible Eurovision voting scandal
Amber Heard admits she didn't honour promised $3.5m donation to civil liberties group with $7m from Depp divorce
You may also like
News
UK 'ready' to launch strikes against ISIS-K in Afghanistan
News
Shamima Begum asks UK for 'second chance' in new documentary
Politics
Why bringing British children home from Syria is the most British thing we can do
News
Shamima Begum lawyer slams Sajid Javid over treatment of teen
News
Bangladesh says it will pursue the death penalty for Shamima Begum
Next Page