The future is here. Or at least it's hurtling towards us at a terrifying speed.

Elon Musk, the billionaire businessman behind Tesla, SpaceX and a number of other hi-tech companies and projects, shared a video of a prototype of his high-speed transportation system Hyperloop. 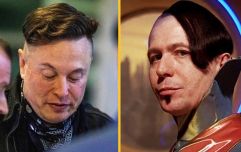 Elon Musk is being roasted for his super-villain haircut

END_OF_DOCUMENT_TOKEN_TO_BE_REPLACED

If you don't know about Hyperloop, the idea is kind of like the London Underground, except rather than boarding trains, passengers travel in pods, which move through sealed tube systems, allowing the pods to travel free of air resistance and friction.

At this stage, Hyperloop is still being researched, but the video shared by Musk shows a prototype, built by students from the Technical University of Munich as part of a competition. In the video, a pod accelerates to 200mph in a mere matter of seconds.

As you can see, it is absolutely terrifying how quickly it accelerates and the top-speed it reaches. Projected speeds for a completed Hyperloop suggest that a pod could travel at over 500mph. That would get you from London to Edinburgh in 50 minutes.

Hyperloop is a long way from reality, with some believing that the project is too expensive and unrealistic to ever come to fruition. But if it does, holy macaroni. Life will never be the same again.