In his most Ricky Gervais moment yet, comedian makes hate crime joke about his audience

'Offended by SuperNature? You just wait...'

Ricky Gervais has turned the knife yet again, this time taking aim at his fans for enjoying his controversial material too much.

END_OF_DOCUMENT_TOKEN_TO_BE_REPLACED

The comic who has been under fire in recent weeks for his Netflix special, SuperNature, has joked that he has reported fans for hate crimes.

Writing on Twitter, after performing at London's Leicester Square Theatre on Wednesday, Gervais said: "They laughed at things that shouldn't be laughed at and I have reported them all for hate crimes. I'll do more soon."

Gervais was testing new content for his upcoming stand-up show titled Armageddon, a show the 60-year-old previously admitted that he wanted to "try and get cancelled" over.

In February, he said: "I’m treating it like it’s my last one ever. It won’t be, but I want to put everything into it. I want to try and get cancelled. No, I just want to go all-out there.’

Another amazing audience at @lsqtheatre for my #Armageddon new material night. They laughed at things that shouldn't be laughed at and I have reported them all for hate crimes. I'll do more soon. pic.twitter.com/td6hIT4TpJ

Wow! Another breathtaking performance by @rickygervais at @lsqtheatre! #Armageddon work in progress was just brilliant! Big prediction but I think it'll blow #Supernature out of the water! And his #comedy chums were just incredible! Just what we needed @lucyheath! #comedicgenius pic.twitter.com/SBH1Oggjir 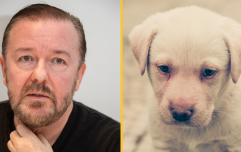 Ricky Gervais lobbies for ban on all animal experiments in UK

END_OF_DOCUMENT_TOKEN_TO_BE_REPLACED

Jervais has been slammed for comments he's made about the trans community in his new special, where he talks about transitioning into 'Vicky Gervais' and suggests that "old-fashioned women" are "the ones with wombs".

The material has been branded "hateful and transphobic".

Following his show in Leicester Square, several of his fans tweeted about how much they enjoyed the performance. One wrote: ‘Just attended new material for Armageddon by @rickygervais When we get to see the finished product we will all be spoilt. Comic genius."