Iceland's Christmas advert banned for being too political

Iceland has had its Christmas advert banned from TV for breaching political advertising rules.

END_OF_DOCUMENT_TOKEN_TO_BE_REPLACED

The ad, which remains available to watch online, was adopted from an animated Greenpeace short film. It features a young girl and an orangutan, and describes the destruction of rainforests as a result of palm oil production. Its release comes after the discount supermarket announced earlier this year that it was no longer including palm oil in its own-brand products.

However, the broadcast code for advertising practice (BCAP) states that adverts with messaging “directed towards a political end” are prohibited. The ad has instead been launched through the retailer's YouTube channel.

“Clearcast and the broadcasters have to date been unable to clear this Iceland ad because we concerned that it doesn’t comply with the political rules of the BCAP code,” said a Clearcast spokesperson. “The creative submitted to us is linked to another organisation who have not yet been able to demonstrate compliance in this area.”

Iceland's managing director Richard Walker said: "Throughout 2018 we have led the retail industry to take action in areas such as rainforest destruction for palm oil and plastic pollution of our oceans. 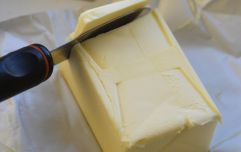 Lurpak spotted on sale for £9.35 in supermarkets - with security tags on packs

END_OF_DOCUMENT_TOKEN_TO_BE_REPLACED

"This year we were keen to do something different with our much anticipated Christmas advert. The culmination of our palm oil project is offering our customers the choice of an orangutan friendly Christmas, and we wanted to reflect this in our advertising.

"Whilst our advert sadly never made it to TV screens, we are hopeful that consumers will take to social media to view the film, which raises awareness of an important global issue."

Palm oil production is estimated to have been responsible for eight per cent of global deforestation between 1990 and 2008, with tens of thousands of the now critically endangered orangutans being killed as a result.

popular
Jeremy Kyle's security guard Big Steve is now on Drag Race
Landlord faces £40k fine after tenant puts swimming pool on roof of flats
The reason why Nottingham Forest don't have a sponsor on their shirt
Tyrone Mings hits back at Graeme Souness for 'weird' article
Comedian cancelled after ‘getting his penis out on stage’ during Edinburgh Fringe Festival
FBI release findings of Rust investigation after shooting of Halyna Hutchins
Pedophile chugs liquid and dies in court shortly after he's convicted
You may also like
Sport
Iceland fans praised for creating incredible atmosphere during Belgium clash
Food
Iceland shoppers can get items for just 1p if they're struggling before payday
News
Iceland worker wins £3,000 after losing job for eating singular chocolate bar from pack
Life
Woman tests positive for covid mid-flight, isolates for five hours in bathroom
News
Iceland boss says staff won't force shoppers to wear masks despite rules
Next Page