Four teenagers have been taken into custody after the body of a homeless man was found at the bottom of a cliff.

END_OF_DOCUMENT_TOKEN_TO_BE_REPLACED

The body of Dale Simmons, 42, was found on April 14 near Chalkpit Hill in Chatham, Kent. Police are treating the death as suspicious, and four teenagers, ages between 16 and 18, have been taken into custody for further questioning. Police believe the group knew Simmons before his death.

Confirming the sad news on Facebook, Peter Simmons announced the death of his "only son."

"It is with a sad and heavy heart Dee and I announce the death of our only son Dale Simmons. Rest in peace," he said.

END_OF_DOCUMENT_TOKEN_TO_BE_REPLACED

A Kent police spokesperson confirmed that his body was found by officers "at around 11am on Thursday."

"It is believed he died at some point the previous evening after suffering injuries consistent with a fall from height and his death is being treated as suspicious," they added. "The man’s next of kin have been informed and a murder investigation is now being carried out by Major Crime detectives from the Kent and Essex Serious Crime Directorate."

Speaking on his death, one friend wrote: "Oh wow just seen about Dale Simmons, fly high another one taken far too soon."

CHATHAM: A man in his 40s who died after falling from a height in the Chalk Pit Hill area Wednesday evening (13 April) has been named locally as Dale Simmons. Kent Police say a man (aged 18) and three boys (aged 17, 16 and 16) have been arrested as part of a murder investigation. pic.twitter.com/xDTHFbCCZW 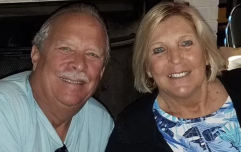 Woman killed after loose beach umbrella impales her in the chest

END_OF_DOCUMENT_TOKEN_TO_BE_REPLACED

Neil Charlick, chief executive of homeless charity Gillingham Street Angels, said, "It's very sad for him and his family."

He continued: "He was local and well-known in the area and to us. He was a nice fella – a lovely and bubbly type of guy.

"He was a sound bloke and nobody had a bad word to say about him. He was always lovely and friendly.’

popular
Landlord faces £40k fine after tenant puts swimming pool on roof of flats
Graeme Souness under fire for calling football a ‘man’s game' while sat with Karen Carney
Comedian cancelled after ‘getting his penis out on stage’ during Edinburgh Fringe Festival
Man with laughing condition like The Joker accused Joaquin Phoenix of stealing his persona
Incredible case of the only known individual whose parents were two different species
Man 19 years older than his wife shocked to learn he had met her when she was a baby
JK Rowling told 'you are next' after stabbing of acclaimed author Salman Rushdie
You may also like
News
Vet's heartbreaking plea after pet desperately tries to follow owner when it's put to sleep
Entertainment
Magnum P.I. star Roger E. Mosley dead at 83 following car crash
Entertainment
Morgan Freeman explains dark reason behind his gold hoop earrings
News
Dad on trial after allegedly killing two teenage daughters for being 'too American'
Entertainment
Rapper Rollie Bands shot dead in front of home after daring haters to find him
Next Page