A beer-drinking challenge took a hilarious turn when a player misjudged a slide and collided with a table full of pints. 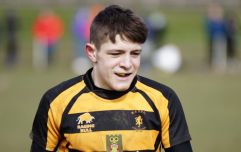 END_OF_DOCUMENT_TOKEN_TO_BE_REPLACED

Video of the incident, in Wales, shows a player from Blaina RFC, smashing head-first into the table after sliding too far on his stomach on Saturday.

The challenge has been popular among amateur rugby clubs in Wales and sees players downing booze after using a water slide mat. 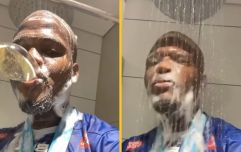 END_OF_DOCUMENT_TOKEN_TO_BE_REPLACED

The event was going as expected until one player brought it to a premature close.

The captain of Blaina, Luke Rees, explained: “Everyone just went nuts, they didn’t know whether to be angry or to burst out laughing, he took a bit of roasting for it."

The 25-year-old added: ''It brought everyone together a bit more, it was a special moment that meant we left Saturday in arms together. 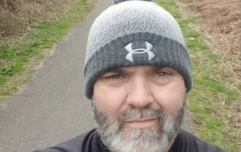 END_OF_DOCUMENT_TOKEN_TO_BE_REPLACED

“A big part of being a rugby club in South Wales is having fun and making real connections, that was our aim for Saturday, just to bring the old and new players together. This definitely brought us closer.

“To be completely honest, it came from the back of another rugby club doing it and us seeing the video online, thinking it would be fun to try.''

popular
People are tearing into the current biggest Netflix movie in the world for one really big reason
Mum dies in sleep in front of children and husband on flight back to UK
Ex-porn star Lisa Ann tells virgin, 46, with micro penis that 'size doesn't matter'
Furious Reading and Leeds ticketholders demand refunds as band replaces Rage Against The Machine
The Game reignites Eminem feud by commenting on Hailie's social media pictures
Robin Williams' wife shares reason why he killed himself
Lisa Kudrow hits back at fans complaining about lack of diversity in Friends
You may also like
Sport
RFU respond to Eddie Jones comments on "closeted" public schools
Sport
Bryan Habana on "incredible" All Blacks star that was the greatest winger he ever faced
Sport
"Everything’s done for you" - Eddie Jones on how public schools influence English rugby
Sport
Springboks star Faf de Klerk knocked out after horror collision with All Blacks winger
Sport
"He’s shown true courage" - Wallabies captain Michael Hooper backed for brave mental health decision
Next Page