Don't mess with a boy and his Yoshi.

An armed robbery is not something a child - or anyone else for that matter - should have to experience, but when a boy and his family's trip to their local Gamestop in Washington DC was interrupted by two criminals with guns, he hardly seemed fazed. 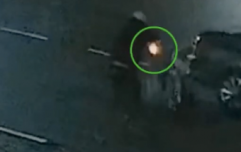 END_OF_DOCUMENT_TOKEN_TO_BE_REPLACED

According to The Washington Post the robbers burst into the store and forced the parents to the ground near the checkouts. The dad, who is unsurprisingly keeping his family's identity anonymous, shouted for his son at the other side of the store, who at the time was looking at the stuffed toys and had picked up the well-known Nintendo dinosaur.

The surveillance footage reveals that as the second robber grabbed the boy he fought back, Yoshi in hand, landing a number of punches in his refusal to back down to them.

“He punched him,” the dad said. “Two left hooks while holding the Yoshi doll.”

The robbers, who are still at large, left the shop with stolen cash but fortunately there were no serious casualties in their wake.

They're still at large now, and the boy's dad said he wanted to speak out about the "terrifying situation" so that the men are caught.

He added: “It’s important for me to be able to say to him: ‘They’re not going to do this to anyone else.’”

As for Yoshi - the manager gave the doll to the boy, and the family say he now carries it everywhere with him.

popular
Scotland international rugby star Siobhan Cattigan dies aged 26
Woman wins millions after suing mum's GP for allowing her to be born
Elon Musk shares 'evidence' we are actually living in a simulation
A definitive ranking of every swear word from worst to best
Nasa warns 'concerning' asteroid will break into Earth's orbit in a week
Omicron symptoms: What you should be looking out for
You can now get paid £150,000 to let a robot use your face and voice
You may also like
Sport
Samuel Umtiti confronts Barcelona fans after they try to block his car on road
Entertainment
Lovely Bones author apologises to exonerated man who spent 16 years in prison for her rape
News
Shocking CCTV footage shows robbers dressed like Harry Potter villains during jewellery heist
Sport
Arsenal defender Gabriel fights off masked robbers in baseball bat attack
News
'Fake cop' burglar used doctored ID to break into a dozen pensioners homes
Next Page