It's more often that we expected.

Most of us take an hour break about half way through our work day, if that. 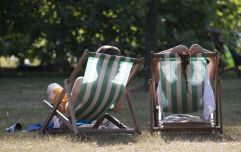 END_OF_DOCUMENT_TOKEN_TO_BE_REPLACED

But according to research we should be taking a lot more than that.

Some research suggests that we should actually be taking breaks every 90 minutes to recharge while at work.

Now obviously this doesn't mean talking an hour every hour and a half, because although there's no science to back it up, we're pretty sure it would get you fired.

But small, quick breaks after every 90 minutes can help us fully recover our physical and mental energy. This way we can avoid burning out or losing concentration.

The theory is all to do with sleep, as LifeHacker explains:

''We sleep in 90-minute cycles. We move from light sleep, to deep sleep (and restorative REM state) in roughly 90-minute waves. About a decade after we learned about this natural sleep cycle, researchers began to realise that we follow a similar pattern in our waking lives as well.''

So essentially we need a little break around every 90 minutes, whether that's stepping outside for a breath of fresh air or going to make some tea, it could increase your productivity and make you a much more concentrated better worker.

So there you go. Just show this article to your boss and you'll be golden. Probably.