It's the first hedge fund to succumb to Wall Street Bets.

London-based hedge fund White Square, one of the hedge funds that shorted Gamestop, has closed down. 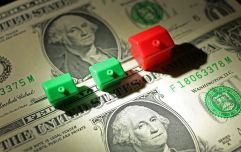 Millions of people become millionaires during the pandemic

END_OF_DOCUMENT_TOKEN_TO_BE_REPLACED

According to the Financial Times, the hedge fund has shut down despite having $440 million in assets under management at its peak. However it suffered double digit percent losses after it bet against Gamestop - known as shorting - in anticipation that the company's stocks would fall.

White Square was one of a number of firms that did this, but ended up suffering millions of dollars in losses after Reddit group r/WallStreetBets bought huge amount of shares in the company. This led to Gamestop's share price rising from $20 to nearly $500 earlier this year.

Firms suffered billions of dollars of losses due to the huge rise in price of the company's shares, but White Square is the first of these to shut down.

The Financial Times reports that the fund insisted its closure was unrelated to the short squeeze from Wall Street Bets and a person close to White Square told the publication that it had earned back a "fair share" of the losses it suffered as a result of this.

White Square's chief investment officer, Florian Kronawitter, told investors in a letter that the hedge fund's closure was more related to two large investors pulling out their funds as part of a larger "shift in trend away from hedge fund investing to cheaper alternatives" in addition to other changes in the investment landscape.

Kronawitter wrote: "The decision to close down is related to thinking the equity long-short model is challenged.

"There are way too many fish in the pond with the same strategy of long-short," he said. "The traditional edge is being arbed away [eroded by other investors], there's an oversupply of capital."

popular
Olympic swimmers barely keep it together after Clare Balding compliments 'third leg'
What are the dark circles on swimmers' backs at Tokyo Olympics?
A definitive ranking of every swear word from worst to best
This is what Olympic athlete Thomas Barr eats on a regular training day
Iranian defector wins judo silver and dedicates Olympic medal to Israel
IOC praises trans weightlifter Laurel Hubbard before athlete’s Olympic debut
Wayne Rooney has just delivered a masterclass in making a story disappear
You may also like
Uncategorized
Pregnant women could be given £400 in shopping vouchers to help them quit smoking
Sport
Brits expected to drink 10 million pints during England vs Croatia
Life
Viral TikTok shows woman glue 7,700 pennies to her bathroom, missing out on potential fortune
News
You can now buy a house with a 5% mortgage deposit from today
News
What is DogeCoin and why are so many people suddenly talking about it?
Next Page