He was taking part in a celebrity match ahead of the Ryder Cup.

Harry Potter star Tom Felton had to be carried off a golf course in America after collapsing during a celebrity match. 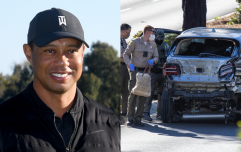 END_OF_DOCUMENT_TOKEN_TO_BE_REPLACED

The PGA of America said that the actor experienced a "medical incident" and was sent to a "local hospital for treatment" after the incident on Thursday.

Felton, who turned 34 on Wednesday and is best known for playing Draco Malfoy in the Harry Potter films, had been participating in a Ryder Cup celebrity match at Wisconsin golf course, Whistling Straits, which is hosting the famous tournament.

He was representing Europe alongside former professional ice hockey player Teemu Selanne, from Finland. The pair were up against a USA duo of 1980 US Olympic hockey captain Mike Eurzione and Olympic speed skater Dan Jansen.

33 years done - good lord it’s been so much fun getting here - yet, somehow, I still feel the best is yet to come - thank you all for your love , support & sense of humour - let’s keep a good thing going - to the next 33 xx pic.twitter.com/OkF8nW1HpV 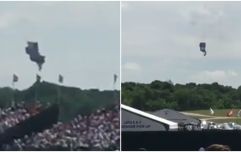 Blimp bursts into flames near the US Open golf tournament

END_OF_DOCUMENT_TOKEN_TO_BE_REPLACED

In a statement, the PGA of America said: "In today's Ryder Cup Celebrity Match, actor and musician Tom Felton experienced a medical incident on the course while participating for Europe.

"He was transported to a local hospital for treatment. No further details are available."

The 43rd edition of the Ryder Cup gets underway later on Friday. The historic tournament sees Europe take on the USA every two years in a team event, and is famous for its partisan atmosphere and passionate support from fans.

We’ll see you on the tee tomorrow for the 43rd #RyderCup pic.twitter.com/Nftlls9rE5 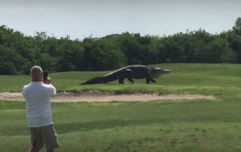 END_OF_DOCUMENT_TOKEN_TO_BE_REPLACED

Europe are the current holders having won the tournament in Paris in 2018, but go into this year's edition as underdogs, taking on a USA side featuring eight of the world's top 10 players.

popular
Tourists left 'squealing' as thousands of venomous crabs invade UK beach
Asda slammed for 'embarrassing poorer families' with new product redesign
Boris and Carrie put south London home on the market for £1,600,000
Runner finishes last in 400m race as penis keeps falling out of shorts
Delivery of new Leeds United shirts delayed after shipping containers were plunged into the sea
Massive piece of Elon Musk's spacecraft lands on farmer's property and could make him very rich
Rishi Sunak wants to crack down on degrees that don’t make students rich
You may also like
Sport
Golfer attempts to play lake-side ball as it lies - ends up spectacularly falling in the drink
Sport
The complete list of LIV golfers, as more big names join up
Sport
New Open champion Cameron Smith set to join controversial LIV Golf tournament
Sport
Viktor Hovland made a lovely gesture to Rory McIlroy after his utterly sublime eagle
Sport
Tiger Woods on Rory McIlroy's gesture on 18 that caused the damn to break
Next Page