Harry and Meghan are not 'dumb'

Piers Morgan has undoubtedly smelled the blood in the water already, and he is circling nearby, ready for whatever right-wing broadcaster will have him on to slag off the Sussex's- perhaps GB News has a slot? Harry and Meghan have reportedly rejected the title "Early of Dumbarton" for their son Archie, with concerns that he would be ridiculed and bullied. 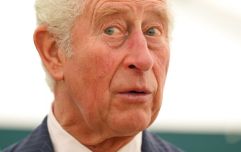 END_OF_DOCUMENT_TOKEN_TO_BE_REPLACED

The Telegraph reports that the couple rejected the title for fears of their son being bullied, but by who was not revealed. Though kids are needlessly cruel, I have a sneaking suspicion that certain British Tabloids with a history of tasteless headlines would have a few thousand article ideas.

Labour MSP Jackie Baillie seemed to have a sense of humour on the topic but has not made an official statement as of yet. She did, however, take to Twitter to share a meme.

Too late! 😂 I am reflecting on this low blow and will issue a full statement in the morning. In the meantime….. https://t.co/6mnCBivkdz pic.twitter.com/Wn9auz1ZvE

The couple has spent most of their married lives fighting for their right to exist. Though the press heavily criticises them, there is also a lot of love for their choice in independence.

popular
Shocking CCTV shows moment rival gangs engage in fierce gun fight in broad daylight
Phil and Josie lose it at world's biggest penis on This Morning
Paul Merson questions Manchester United decision to appoint Ralf Rangnick
Dave Chappelle labelled as ‘childish bigot’ by students at old high school
Man Utd players 'unimpressed' at not receiving WhatsApp updates on Rangnick
Internet left confused after hearing Salt Bae's voice for the first time
Queen has private mobile phone but only answers it to 2 people and not her sons
You may also like
Politics
Joe Biden reportedly farted next to Camilla and 'she won't stop talking about it'
Crime
Prince Andrew accuses Virginia Giuffre of procuring ‘slutty girls’ for Epstein
News
Met Police taking ‘no further action’ against Prince Andrew
News
Prince Andrew 'worried' after High Court decision and 'not usual blasé self', according to reports
News
Prince Andrew could be made to give evidence in court after High Court ruling
Next Page