This week sees the second anniversary of the Grenfell Tower fire

Grenfell United have projected a series of messages highlighting a national fire safety crisis onto the side of tower blocks across the country.

On Wednesday night - almost exactly two years on from the Grenfell Tower fire - buildings in London, Salford and Newcastle were illuminated with messages which warned they are still not fitted with sprinkler systems, have defective fire doors or are covered in dangerous cladding.

Tonight @GrenfellUnited is shining a spotlight on tower blocks across the country STILL unsafe 2 years after Grenfell! #demandchange pic.twitter.com/1y8s97NpyC

A huge projection is being beamed onto the side of a block of flats in Salford Quays as residents living in high rise tower blocks across #Manchester demand action to remove flammable cladding from their homes.

This Friday marks two years since the Grenfell fire. pic.twitter.com/TRRrF6tc0U 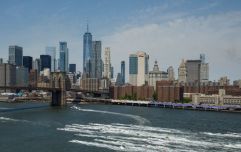 One fatality reported as helicopter crashes into New York skyscraper

END_OF_DOCUMENT_TOKEN_TO_BE_REPLACED

72 people died at Grenfell Tower when the building caught fire on the night of June 14, 2017.

The cladding which covered the tower block is thought to have been a key contributor to the speed with which the fire spread.

Grenfell United, an organisation set up to represents survivors of the tragedy, continue to campaign for similar types of cladding to be removed from all buildings across the country.

'Everyone in the UK deserves to live in a safe home,' a statement on their website reads. 'We are campaigning for dangerous combustible material to be removed from homes, be replaced safety and never used again.

'And to see changes to building regulations and fire safety so that people are safe in their homes.'

Despite their campaigning, the Ministry of Housing, Communities and Local Government admitted this week that just three privately-owned tower blocks have been repaired in the last four months. As The Guardian highlight, this leaves 146 still vulnerable.