Where to start about last night's presidential debate between Democrat Hillary Clinton and Republican Donald Trump?

How about with the fact that, throughout the 90 minute face-off, Trump appeared to be battling a bad case of the sniffles or some kind of allergy flare-up.

Seriously, someone pass this guy a tissue or some Vicks. 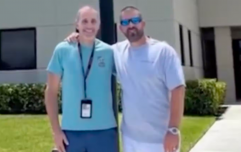 END_OF_DOCUMENT_TOKEN_TO_BE_REPLACED

"Snifflegate" quickly became a topic of discussion between Twitter users following the debate.

Trump noticeably drank a lot of water during the debate but never blew or wiped his nose - perhaps fearful of appearing unwell or vulnerable after he made such a fuss about his rival's bout of pneumonia earlier this month.

Of course, there were some people online who semi-seriously joked that Trump had snorted something beforehand to get him pumped for the debate.

Donald Trump sounded like every coke head I ever ran away from at a party in1989.

But the accusation got major legitimacy when a sitting US governor, Howard Dean, just came out and said it:

Dean is a major Democratic party player: he's the governor of Vermont, a former chair of the party, and ran for president in 2004.

He seems to be standing by the slur too: the tweet hasn't been deleted. Dean's accusation has divided people, naturally enough:

Maybe, but please remember, Governor, "When they go low, we go high." Those kinds of speculative accusations are beneath us.

saying what everyone at home is thinking. Why all of the sniffing?

BuzzFeed reports that, after the debate, Trump said his nasal issues were the result of a faulty microphone - that was perhaps done deliberately. ANOTHER CONSPIRACY!