The government has pledged to put more funds into the search for missing child Madeleine McCann, who disappeared in 2007 while on holiday with her parents at the age of three.

END_OF_DOCUMENT_TOKEN_TO_BE_REPLACED

The Home Office have said a similar amount of money to that put into the case for 2018/19 - around £300k - will be put towards the search, which will be extended until March 2020 at least.

A final decision on this matter will be made in October.

The search has lasted 12 years, with more than £11m being spent on the case. In 2013, the Met Police took it upon themselves to launch 'Operation Grange' dissatisfied with the lack of progress made by Portuguese police.

One month ago, a new suspect in the case emerged, with British police handing information to Portuguese authorities on a foreign paedophile who was in Portugal at the time of McCann's disappearance.

A recent Netflix documentary on the tragedy sparked controversy due to Madeleine's parents, Kate and Gerry McCann, refused to partake in the docu-series.

The couple issued a statement explaining their decision earlier this year, which read:

"We are aware that Netflix are planning to screen a documentary in March 2019 about Madeleine's disappearance. 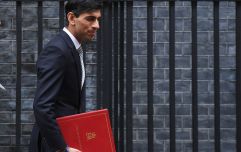 END_OF_DOCUMENT_TOKEN_TO_BE_REPLACED

"We did not see - and still do not see - how this programme will help the search for Madeleine and, particularly given there is an active police investigation, it could potentially hinder it.

"Consequently, our views and preferences are not reflected in the programme.

"We will not be making any further statements or giving interviews regarding this programme."

popular
Sprinter overcomes gruesome gymnastics injury to win Olympic medals
A definitive ranking of every swear word from worst to best
Olympic swimmers barely keep it together after Clare Balding compliments 'third leg'
What are the dark circles on swimmers' backs at Tokyo Olympics?
IOC praises trans weightlifter Laurel Hubbard before athlete’s Olympic debut
Iranian defector wins judo silver and dedicates Olympic medal to Israel
Here's how to see who's been taking screenshots of your Instagram Stories
You may also like
News
Harvey Price mocked in 'cruel texts from eight police officers'
Entertainment
X Factor 'scrapped by ITV with no plans to return'
News
Donald Trump compared to Bin Laden over US Capitol riots
News
Wayne Rooney has just delivered a masterclass in making a story disappear
News
How Simone Biles showed us all how to prioritise our mental health
Next Page