"That disguise is fooling nobody," one viewer said

Glastonbury fans watching the festival from home are convinced they've spotted the Queen in the crowd.

END_OF_DOCUMENT_TOKEN_TO_BE_REPLACED

Those who tuned in to watch from the comfort of their living rooms on Friday evening may have noticed the Queen-like fan, who everybody is dubbing a doppelgänger of Her Royal Highness.

She got herself right in the thick of it ready for a set from Robert Plant, best known as the frontman of Led Zeppelin. He was joined by bluegrass-country singer Alison Krauss.

The fan had her hood up and shades on, in what viewers think was the Queen's attempt not to be spotted.

Lovely to see the Queen enjoying a bit of Robert Plant at #Glastonbury. pic.twitter.com/Ra4jyNz9lZ

END_OF_DOCUMENT_TOKEN_TO_BE_REPLACED

Adding to the rumours online, one fan said: "The Queen has turned up at Glastonbury to watch Robert Plant. That disguise is fooling nobody."

"FFS lol God save the Queen," another added.

Meanwhile, others are convinced the fan is actually Princess Anne, though we can't imagine it's exactly her sort of scene either... 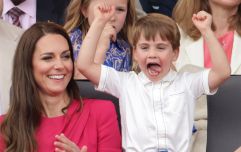 Supernanny weighs in on Kate's reaction to cheeky Prince Louis

END_OF_DOCUMENT_TOKEN_TO_BE_REPLACED

In other Glasto news, Paul McCartney's set has sparked conversation after he played a video of Johnny Depp during his set on Saturday night.

The pair have been close friends and collaborators for years, with Depp starring in a number of McCartney's music videos.

While performing his 2012 track My Valentine, the screen showed snippets of the song's original music video, which also features Natalie Portman. In the black-and-white clip, Depp can be seen playing guitar and reciting the song’s lyrics in sign language.

Billie Eilish used her platform at Glastonbury to criticise the new US abortion law during her headline set (Photo: Getty Images)

Meanwhile, Billie Eilish used her headline set to call out the latest US abortion ruling, which gives states individual power to decide whether women are legally allowed to get abortions.

The 20-year-old put on a typically high-energy show on Friday as she became the youngest star to headline the festival.

But amid her spirited performance, Eilish took time in the middle of her set to confess: "Today is a dark day for women in America. It's all I'm able to say about it. I can't bear to think about it."

Phoebe Bridgers and Idles also blasted the decision to overturn Roe v Wade during their performances at Worthy Farm.