Germany went short of calling the payment "reparations" or "compensation"

Germany has officially recognised the Herero-Nama genocide that took place at the start of the 20th Century, and has agreed to pay Namibia over one billion euros as a gesture of reconciliation. 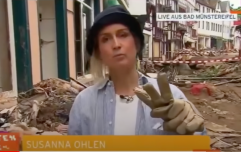 END_OF_DOCUMENT_TOKEN_TO_BE_REPLACED

Tens of thousands of men, women and children in West Africa (modern-day Namibia) were shot, tortured or driven from their homes into the Kalahari desert to starve by German troops between 1904 and 1908. This was after Herero and Nama tribes rebelled against colonial rule in what was then known as German South West Africa.

Since 2015, Germany has been in negotiations with the Namibian government in attempts to "heal the wounds" of historic violence. They have now officially recognised the crimes against the Herero and Nama tribes as genocide, however the €1.1 billion is a gesture of reconciliation and not legally binding reparations.

German Foreign Minister Heiko Maas said in a statement: "Our aim was and is to find a joint path to genuine reconciliation in remembrance of the victims.

"That includes our naming the events of the German colonial era in today’s Namibia, and particularly the atrocities between 1904 and 1908, unsparingly and without euphemisms.

"We will now officially call these events what they were from today’s perspective: a genocide."

The Guardian reports that the €1.1 billion will be paid to existing aid programmes in Namibia over 30 years, with over €1 billion going towards programmes relating to land reform, rural infrastructure, water supply and professional training. Communities of Herero and Nama descendants, which form ethnic minorities in all of the seven affected regions, are meant to be involved in the development of the specific projects.

Around €50 million will go towards setting up a foundation for reconciliation between the two states, including cultural projects and youth exchange programmes. END_OF_DOCUMENT_TOKEN_TO_BE_REPLACED

The joint declaration from the two nations recognises the atrocities as genocide, but does not include the words "reparations" or "compensation," due to fears that this could set a legal precedent for similar claims from other nations.

This has angered some key figures and leaders in Namibia, with local newspaper New Era reporting that at least three traditional leaders had refused to endorse the final wording of the declaration, despite having previously supported the negotiations. This could make it difficult for Namibian President Hage Geingob to sign the deal.

A spokesperson for Geingob described the German acknowledgement of genocide as "the first step" in the right direction, saying that it is "the basis for the second step, which is an apology, to be followed by reparations."

As far as Germany is concerned, it believes that it has negotiated the agreement with the Namibian government representing all of the country's population, so the deal does not therefore hinge on the approval of Herero and Nama descendant groups.