Following the verdict, Darnella Frazier took to Facebook to say: "I just cried so hard.

"This last hour my heart was beating so fast, I was so anxious, anxiety bussing through the roof.

"George Floyd we did it!! Justice has been served."

Among those thanking Frazier for her bravery are members of George Floyd's family.

"The sad thing is if it hadn't been for that 17-year-old girl Darnella, it would have been another Black man that was killed by the police ... and they would have said, 'Oh, it was drugs, oh it was this,'" said Floyd's aunt, Angela Harrellson.

"And we would never have had the story we would have. And wouldn't be here today talking."

Oprah Winfrey paid tribute to her, saying she was "grateful to Darnella Frazier."

Frazier received the 2020 PEN/Benenson Courage Award from the nonprofit PEN America in December last year, with Spike Lee presenting her with the award stating: "I'm so proud of my sister. 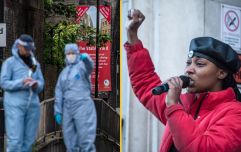 END_OF_DOCUMENT_TOKEN_TO_BE_REPLACED

"She documented the murder of George Floyd, our brother. King Floyd.

"And that footage reverberated around this God's earth."

Martin Luther King Jr's daughter tweeted that she was sending "emotional healing" to Frazier, also sending love and strength to George Floyd's family, and the family of Makhia Bryant - a 16 year old shot and killed by police in Ohio shortly after Chauvin's guilty verdict.


Love and comfort to the Floyd family.

Peace and blessings to Gianna Floyd.

Hope and grace to each of you.

Frazier filmed the video on 25th May 2020, posting it on Facebook a day later, saying "They killed him right in front of cup foods over south on 38th and Chicago!! No type of sympathy #POLICEBRUTALITY."

Little did she know that this footage would be a key part of the evidence in convicting Chauvin.

Darnella Frazier is a hero. Her bravery in that moment must never be forgotten. We lift you up Darnella.

During Chauvin's trial, Frazier now 18 years old, spoke of her emotions in the aftermath of Floyd's death.

At one point, she revealed that she stayed up late apologising over and again to George Floyd for not doing more, but said she now realises "it’s not what I should have done. It’s what he [Chauvin] should have done."

popular
Sex expert says these are the four words you should always say in bed
Martin Dubravka scores calamitous own goal to give Spain the lead
UK Government urges children to sing bizarre 'One Britain One Nation' song on June 25
Japan becomes latest country to introduce plans for a four-day work week
Hospital 'declares black alert' after A&E flooded with hundreds of patients
Daniel and Lily from The Undateables have called off their wedding
UK government roasted for getting kids to sing creepy ‘One Britain One Nation’ song
You may also like
Football
Marcus Rashford speaks out after fans boo England team taking knee
Sport
Gareth Southgate confirms England squad will continue to take the knee
Football
Gareth Southgate says England squad may want to reconsider taking the knee after fans booed
Politics
Love Island's Mike Boateng on being a black police officer
News
David Lammy: ‘We can’t tackle systemic racism until the government takes it seriously’
Next Page