The soldiers allegedly demanded gold in return for WiFi

The Venezuelan military has killed four members of a remote Amazonian tribe after an altercation over a changed WiFi password.

END_OF_DOCUMENT_TOKEN_TO_BE_REPLACED

The Yanomami tribe are the largest isolated tribe in South America, with a collective of 38,000 people spread across 18 million hectares. It's understood that the Yanomami made a deal with a military airbase located in an area of the rainforest called Parima B, near the Brazillian border.

Soldiers had allowed the tribespeople to use their WiFi as part of an early warning system designed to alert officials to illegal gold mining on their land. With a six-week walk to the nearest town - and only accessible by plane - the internet was the quickest way to spread the word.

Tribespeople visited the airbase after the WiFi signal was cut, to which soldiers informed them they had changed the password.

Anti-Indigenous violence has soared under President Bolsonaro, who wants to open the Amazon to development. pic.twitter.com/CzpLg1Sw7D 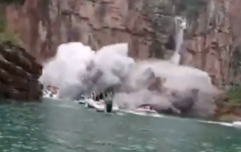 END_OF_DOCUMENT_TOKEN_TO_BE_REPLACED

Things are understood to have escalated, leaving five injured and four dead. Local reports suggest that the deceased include a 45-year-old woman, two 22-year-old men and a 30-year-old man. A 16-year-old was also injured.

In retaliation, tribespeople blocked attempts to airlift injured soldiers out and the atmosphere and tension are expected to make post-mortems difficult.

Members of the Yanomami tribe in Amazonas confronting a military commander and DGCIM officers sent to the area after 4 members of the tribe were shot and killed by Venezuelan military personnel. #Venezuela https://t.co/8732LDsaOn

Amazonas state governor Miguel Rodriguez confirmed the altercation via Facebook, where he explained:  "There was a confrontation between Yanomami brothers and companions from the Aviation component stationed in Parima B, after the Internet was not shared with them, generating a confrontational situation, which resulted in four deaths and five injuries."

A video taken after the incident shows people confronting who is believed to be a high ranking general.

“You guys are supposed to come take care of us. They didn't have to use weapons like that,” a woman cries. "Our laws say that any problem that occurs on the land of the Yanomami people is resolved on that land."

The Yanomami have suffered immensely over the years, having been invaded by 40,000 Brazilian gold miners during the 1980s.

20 per cent of the Yanomami died in just seven years, reports Survival International. However the conflict did not stop there and the Yanomami continue to face hardship after hardship to this day.