Former Prime Minister Sir John Major has expressed his concern about a planned deal between the Conservatives and the Democratic Unionist Party. 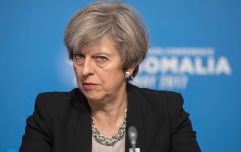 END_OF_DOCUMENT_TOKEN_TO_BE_REPLACED

Speaking about the deal, which is reportedly set to be finalised within the next 24 hours, Major told BBC Radio 4's World at One that he was "dubious" about it and its impact on the peace process.

He explained that May making a deal with one of the main parties in Northern Ireland might lead to the government no longer being viewed by some as an "impartial honest broker" in upholding Northern Ireland institutions and in restoring power-sharing arrangements.

During his time as PM, Major's government laid the foundations for the peace process in the 1990s, and he also warned that peace in Northern Ireland should not be taken for granted.

As well as this, Major suggested the DUP would be requesting money and this would be viewed by some as the government "paying cash for votes in parliament."

Urging May to consider governing on her own, he added that this would not "carry the baggage" for the Tories that coming to an agreement with DUP would.

popular
Multiple fatalities after planes collide mid-air over airport
Former Playboy Bunnies detail what it was like having unprotected orgies with Hugh Hefner
Pilots fly over destination airport at 37,000 feet - because they were both sleeping
Gerard Butler breaks silence after death of 'brother in arms' Darius Danesh
Incredible case of the only known individual whose parents were two different species
UK city named the 'most dangerous' in Europe, according to study
Mum cuts off boyfriend's 'private parts' after he 'tried to rape 14-year-old daughter'
You may also like
Politics
Theresa May has 'Love Actually' moment as she dances to Craig David after Boris Johnson gets the boot
News
Theresa May urges Priti Patel to reconsider policing bill: 'our freedoms depend on it'
News
All living former prime ministers have condemned Boris Johnson's latest Brexit move
News
Gavin Williamson nominated for MP of the year award
Politics
This is how much Theresa May could earn now she’s no longer prime minister
Next Page