He was only the second person in the world to get the jab.

William Shakespeare, the first man to get the Pfizer-BioNTech, has sadly passed away at the age of 81, of an illness unrelated to the vaccine 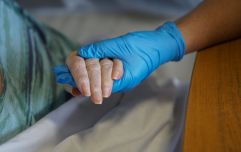 Care worker angry after losing job for refusing the vaccine

END_OF_DOCUMENT_TOKEN_TO_BE_REPLACED

Coventry councillor Jayne Innes, a friend of Mr Shakespeare, said he had died on Thursday and added the "best tribute to Bill is to have the jab".

Shakespeare had worked at Rolls Royce and was a parish councillor.

Ms Innes wrote in a post on Facebook: "Bill will be remembered for many things, including a taste for mischief."

West Midlands Labour group said on Twitter: "Bill made global headlines as [the first] man to have Covid vaccine.

"His decades of service to the party were recently recognised by Keir Starmer.

"Our thoughts are with Joy and Bill's family and friends."

We're sorry to hear of the death of Coventry Labour stalwart Bill Shakespeare. Bill made global headlines as 1st first man to have Covid vaccine. His decades of service to the party were recently recognised by @Keir_Starmer. Our thoughts are with Joy and Bill's family & friends. pic.twitter.com/ANCTeGFYEs

Councillor Angela Hopkins said Mr Shakespeare had helped her when she had campaigned for the Bablake ward.

"He was very thoughtful and always, in his work as a parish councillor, very much putting forward the concerns and views of the local residents in his area," she said.

popular
Pep Guardiola's defence of his tone deaf comments is a bizarre hill to die on
The JOE Friday Pub Quiz: Week 261
Supermarket worker calls out manager as 'pervert' over PA system then quits on spot
Shipwrecked mum found dead saved her children by breastfeeding them at sea
Care worker angry after losing job for refusing the vaccine
'Gleeking' is the 'disgusting' bodily function that most people don't know they can do
Prince Andrew 'worried' after High Court decision and 'not usual blasé self', according to reports
You may also like
News
Trinidad and Tobago confirm Nicki Minaj's vaccine claim never even happened
News
Covid teams can vaccinate pupils at school against parents’ wishes
News
Premier League to tell fans to 'stay away' unless they're double-jabbed
News
Covid winter plan: Everything you need to know
News
12-15 year olds to be offered COVID-19 vaccine
Next Page