Fireworks set off during two minutes' silence at Celtic game

Fireworks were heard being set off during the minute's silence to remember the Duke of Edinburgh before Celtic's game against Livingstone in the Scottish Premiership. The fireworks appeared to be set off outside the ground, and interrupted the moment's silence. 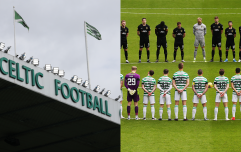 END_OF_DOCUMENT_TOKEN_TO_BE_REPLACED

Ahead of all matches across the country a silence has been observed in honour of Prince Philip, who passed away on Friday at the age of 99 at Windsor Castle.

However as both sets of players at Celtic Park bowed their heads and remembered the duke, the sound of fireworks could be heard outside the ground. The sounds of the pyrotechnics could be heard clearly on television and radio coverage of the match.

Celtic fans letting off fireworks during the minutes silence for the Duke of Edinburgh pic.twitter.com/YEfQGNAUxP

A video on Twitter appears to show a person setting off some fireworks in close proximity to the ground, suggesting that it was a deliberate attempt to disrupt the minute of commemoration.