The family of Henry Vincent - the burglar killed during a robbery in south-east London - have clashed with police and locals today after laying a shrine to celebrate his birthday.

The tributes - which were attached to lampposts and road signs, featured flowers, cards and balloons - were placed close to the Hither Green home of Richard Osborn-Brooks, the pensioner who fatally stabbed Vincent earlier this month after he broke into his home. 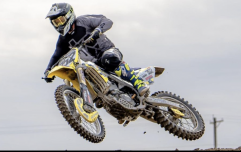 END_OF_DOCUMENT_TOKEN_TO_BE_REPLACED

Relatives and friends of Vincent arrived on the street today in a bid to celebrate what would have been his 38th birthday, despite vowing to never return after being told by police to stop placing tributes in the area.

Floral tributes had previously been erected and torn down three times by angry neighbours of Osborn-Brooks, with some calling them an "insult" to the 78-year-old.

According to the Mirror, family members told the police that they "will stand here and wait all day long", before eventually leaving the scene.

The shrine remains in place however, with police currently standing close by.

Despite being released without charge after the fatal stabbing, Osborn-Brooks and his wife have faced death threats and have been forced to enter protective police custody.

It has been claimed that the couple will sell their house and not return.

popular
The JOE Friday Pub Quiz: Week 248
700-pound George Floyd statue unveiled in US
Scotland fans help with clean-up in Leicester Square as Tartan Army leaves London
Southgate explains why he didn't move Coke bottles like Ronaldo
James O'Brien beautifully dismantles argument of England fan who booed the knee
Crystal Palace footballer is one of four British women suing Pornhub
'I made Tommy Robinson go viral, will you forgive me?'
You may also like
News
Starmer reveals dad's home burnt down with dog inside while he was dying in hospital
Entertainment
Oscar-nominated actor George Segal dies aged 87
News
French radio station mistakenly shares obituaries for the Queen, Sir Alex Ferguson and more
Life
What's it like to design your own coffin?
News
Five teenage girls die in escape room fire in Poland
Next Page