Support for Extinction Rebellion has quadrupled since they blockaded London

Before protests Extinction Rebellion says 10,000 pledged support to demonstrations and that number has now risen to 40,000. 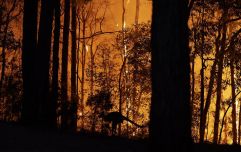 END_OF_DOCUMENT_TOKEN_TO_BE_REPLACED

"The debate on this is over – ordinary people are now saying it is time for politicians to act with real urgency."

16-year-old Greta Thunberg became the figurehead of the climate strike movement after leading protests and school walkouts in her native Sweden.

On Tuesday she addressed the UK's parliament. She said: "You lied to us. You gave us false hope. You told us that the future was something to look forward to. You don’t listen to the science because you are only interested in solutions that will enable you to carry on like before."

You may also like
Life
It's time to clean up Britain's dirty beaches
Environment
Bear Grylls praises the youngsters fighting for the future of the world
News
Extinction Rebellion says the political system isn't fit for purpose
News
Is it already too late to save the world?
Food
Meet the Brummies reclaiming urban space to feed their local community
Next Page