Sometimes we wonder whether Boris Johnson is doing it on purpose.

The recently appointed Foreign Secretary - yes that wasn't a bad dream, it actually happened - has made a career out of playing the bumbling fool, whilst at the same time engaging in highly divisive, and some may say devious, politicking.

END_OF_DOCUMENT_TOKEN_TO_BE_REPLACED

It is enough to make you wonder whether he plays up to his comic persona to weirdly charm and endear himself to large sections of the general public, thus allowing himself carte blanc to do whatever he likes because it's just 'Boris being Boris'.

That said, surely his latest blunder can't have been planned. Mainly because it only serves to paint him a vacuous surface politician with no real substance nor firm believes - which is exactly what he has been accused of since the EU referendum. 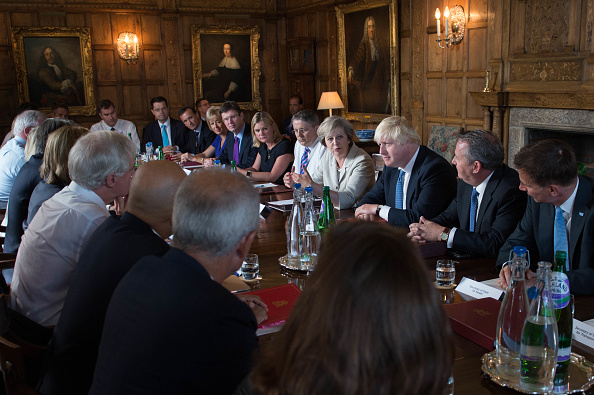 Johnson was pictured sat beside Prime Minister Theresa May during a specially convened cabinet meeting, specifically arranged in order to "brainstorm" Brexit, and strategically plan for the UK's departure from the European Union.

Boris certainly looked the part to the PM's left (we suspect he was seated there so May could keep an eye on him); he was seen banging on the table in agreement as his leader name-checked both Team GB's Olympians and Paralympians.

Before him on the table was a red file, no doubt filled with all the important notes and documents he had prepared for a discussion about one of the most significant and wide-changing changes to our constitution in four decades, right?

Wrong. Because unlike his fellow cabinet members, whose files were filled to the brim, Johnson's was...well...empty. Void of information. Lacking in substance. Sans data. Sparse in fact. A whole lot of hollow nothing. Remind you of anyone?

Unlike Sajid Javid who has gone all out with Post-Its, Boris is hoping nobody notices he left his notes at home. pic.twitter.com/17GAehllHd

Some would say it is a metaphor of Boris' whole political career - we couldn't possibly comment.

popular
World's tallest female pornstar explains why she prefers shorter men
Former Leeds striker banned for four years over yellow card bribe
'I resent my mum for not switching me back after baby mix up at hospital'
Doomsday Clock 2022 at 100 seconds to midnight - closest to apocalypse yet
Daniil Medvedev booed mercilessly by Australian Open crowd during honest interview
Premier League footballer arrested on suspicion of child sex offences has bail extended
GMB guest urging people to ditch conservatories while sat in one labelled 'hypocrite'
You may also like
News
Tory MP accuses No 10 of blackmail against colleagues and urges victims to go to police
News
Boris Johnson tells party rebels to 'bring it on' in fight for his job
News
Five False claims made by Boris Johnson during Prime Minister's Questions
News
Senior Tory David Davis tells Boris Johnson 'in the name of God, go' in fiery PMQs showdown
News
BREAKING: Tory MP Christian Wakeford defects to Labour Party
Next Page