Sarah Ransome, one of the accusers of the late Jeffrey Epstein, has said "sharks were a welcome alternative" as she recalled trying to escape from his private island.

Ransome, 37, says she was willing to brave shark-infested waters after she was repeatedly raped for three days, reports the Daily Mail.

"I knew there were sharks in the water but I had to get away," she said. 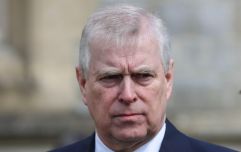 Prince Andrew 'should be next target' for prosecutors after Ghislaine Maxwell jailed, lawyers say

END_OF_DOCUMENT_TOKEN_TO_BE_REPLACED

'At that point the sharks were a welcome alternative to the hell I'd been through. In that moment death felt preferable to one more rape.'

Ransome claims that Epstein's business partner Ghislaine Maxwell was the one to stop her.

"She placed her hand on my back and said: 'It's OK honey. Come with me.' And I went back with her into the monster's lair," she told the outlet.

This comes amid Maxwell's ongoing trial in New York, where she is standing trial for the following accusations:

Maxwell has denied all charges, but Ransome says she wants to "look Ghislaine in the eyes" if she is convicted.

Sarah Ransome, a victim of Jeffery Epstein arrives for the trial of Ghislaine Maxwell at the Thurgood Marshall United States Courthouse on November 29/Via Getty

"I want her to know I'm there when her sentence is read.

"I want justice to finally be done."

She said that Epstein was charismatic and charming, seeming genuinely interested in her.

She continued: "He was old but I didn't think of him as a dirty old man. I felt safe because there were so many girls my age with him.

"They were well-groomed, they seemed happy.

"In my naivety I felt grateful that I'd landed on my feet by meeting these new friends.

"I had no idea I was being groomed to enter hell."

The 37-year-old New York resident filed a civil suit against Epstein and Maxwell in 2017, which was then settled.

At the time, Maxwell's lawyer Laura Menninger said: "This is not and never will be a sex-trafficking case. It is the story of a brief, consensual relationship between two adults.

"Ms Ransome may have come to regret her consensual relationship with Mr Epstein but that does not mean she was the victim of unlawful sex trafficking or that Ms Maxwell is somehow liable for it."

popular
Incredible case of the only known individual whose parents were two different species
Jurgen Klopp reacted like everyone else to Darwin Nunez headbutt red card
Man, 27, who is engaged to great-great-grandmother, 74, slams critics of his 'perfect' relationship
Bulgarian mystic who correctly predicted Princess Diana’s death and 9/11 sees 2022 prophecy come true
Landlord faces £40k fine after tenant puts swimming pool on roof of flats
Graeme Souness 'doesn't regret a word' of 'man's game' comments that sparked sexism row
Angry woman confronts blind man at gym and accuses him of starting at her
You may also like
News
Prince Andrew is facing yet another legal battle over Jeffrey Epstein claims
News
Prince Andrew is now banned from public return at ancient ceremony after missing Jubilee 'due to covid'
News
'Prince Andrew Is A Sweaty N***e' hits UK top 20 during Jubilee celebrations
News
Song called 'Prince Andrew Is A Sweaty N***e' rising up British charts ahead of jubilee
News
People should be more 'forgiving' towards Prince Andrew, Archbishop of Canterbury says
Next Page