There remain others left to identify

An England fan suspected of vandalising an ambulance following the Three Lion's win over Sweden on Saturday has been identified, according to police.

END_OF_DOCUMENT_TOKEN_TO_BE_REPLACED

The force circulated CCTV images and launched a manhunt after an NHS ambulance was trampled near Borough Market during wild celebrations as England reached their first World Cup semi-final in 28 years.

Fans were photographed jumping on the bonnet and roof of the rapid response vehicle while the London ambulance service officer attended a call nearby.

We're delighted with the result, but this has put a big dampener on the celebrations for us: while our officer attended a call nearby, this car was damaged in Borough High Street during the celebrations after the game - it's now off the road to be repaired. pic.twitter.com/V71kOEn4OO 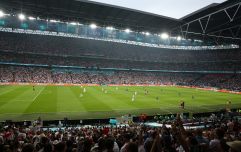 The majority of English voters support footballers taking the knee

END_OF_DOCUMENT_TOKEN_TO_BE_REPLACED

The car was left with a completely smashed windscreen and heavy denting to the bonnet, roof and bumper.

London Ambulance Service tweeted photos of the badly damaged ambulance and the official Joint Response Unit Twitter account also tweeted to say: "We are better than this England."

Police have now confirmed that a woman suspected of having taken part in the vandalism has now been identified. In a post, Poplar Police thanked the public for helping find one of the culprits, adding: "Now it's our turn."

Several people were photographed on top of the ambulance. It is yet to be confirmed whether any other suspected have been identified, however, the force has continued to tweet out images of those believed to have taken part in the wild celebrations.

Elsewhere some England fans even invaded Swedish furniture store Ikea in Westfield shopping centre in Stratford, London, jumping up and down on the beds and singing.

popular
Diego Simeone trolled after posting chess photo with one glaring mistake
Man sends pic of him receiving oral sex to all passengers on plane - gets arrested
Dramatic video shows the moment dad attacks 3-year-old son's suspected murderer in court
Black box prepped for doomsday as creators warn we 'are now being recorded'
R Kelly due to be sentenced today, with prosecutors calling for 25 years
Ex-Trump aide claims he tried to grab the wheel when his driver wouldn't take him to Capitol riots
Subway worker shot dead for putting too much mayo on sandwich
You may also like
Sport
UEFA opens disciplinary proceedings against FA over Wembley fan chaos
Sport
Police release images of men wanted in connection to Euro 2020 final chaos
Sport
Fans loved seeing Jordan Pickford living his best life after Euro 2020 heroics
News
Harry Maguire's dad suffers suspected broken ribs after being trampled at Wembley
News
Anton Ferdinand says England should be banned from hosting 2030 World Cup
Next Page