Eiffel Tower evacuated after man spotted climbing up the side

The Eiffel Tower has been temporarily closed after a man was seen climbing up its side on Monday.

Images emerged on social media of a man climbing the landmark, which is 1,062 feet in height.

WHY WOULD YOU CLIMB UP THE EIFFEL TOWER pic.twitter.com/wynQOUl2vR


Firefighters are at the scene and have established contact with the man climbing the tower, a spokesman for the fire brigade said. 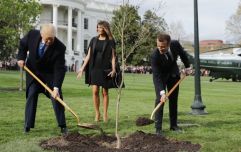 END_OF_DOCUMENT_TOKEN_TO_BE_REPLACED

Witnesses in attendance claimed that he entered the tower normally, but began climbing when he got to the second floor.

The official Twitter account for the Paris landmark posted to say that the tower is closed until further notice and advised visitors to postpone their visit.

Visitors who were underneath and surrounding the tower were also told to evacuate the area.