PIC: Drunk guy has no idea how he got home, wakes up to find selfie with the police on his phone

We can only imagine how strong the fear was when he first set eyes upon this.

We’ve all been there. Well, most of us have.

Waking up after a heavy night on the tiles, with barely a memory of what happened the night before, haunted by the prospect of having to piece together the events of the evening hoping that you didn’t cause yourself too much embarrassment.

One dude in Tasmania went through such an experience at the weekend and when scrolling through photos on his phone after waking up from the night before, he spotted one of two smiling police officers taking a selfie while he pointed his thumb towards the camera from his bed in the background.


After the picture went viral on Reddit, Tasmania Police posted it on their official Facebook page, explaining that they had been contacted by a taxi company for assistance in getting the man home. 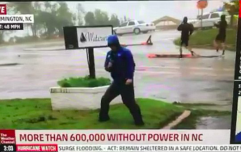 END_OF_DOCUMENT_TOKEN_TO_BE_REPLACED

When they arrived, they found out his address, took the man home and waited for a friend to arrive to look after him.

Because he was a bit worse for wear, the officers took the opportunity to record the moment with a selfie in the likely event he could not remember how he got home.

It was a pretty sound thing of the police officers to do and, as you can see above, they couldn’t have received a more Australian compliment from the man they helped afterwards.

The word blocked out above, in case you're wondering, is the plural equivalent of an acronym used for the phrase 'See You Next Tuesday'.

Tasmanian police also used the picture to reiterate an important safety message about taking the necessary precautions to have a safe night out, such as arranging transport and accommodation and to look out for your companions during the night and when heading home.

For more information on drinking responsibly, check out drinkaware.co.uk