He warned that electing Biden would "demolish" the American dream

As riots continue across the country and black men and women continue to killed by police, US President Donald Trump has said that Joe Biden would bring chaos to US cities and cause a wave of socialism across the US if he was elected.

In his speech on the final night of the Republican convention, Trump called Biden "weak" and portrayed his rival as soft on crime.

Addressing a crowd of over a thousand maskless supporters on the South Lawn of the White House, Trump accepted his party's presidential nomination, and told the tightly seated crowd that his achievements were "now in danger" because of the threat of Biden.

To date, 181,000 Americans have died as a result of coronavirus.

He warned that electing Biden would "demolish" the American dream and taunted Democrats and Biden by saying “we’re here and they’re not," in reference to the White House behind him.

According to data from the University of California, Davis, 13.9 of Americans live in poverty.

"This election will decide whether we save the American dream, or whether we allow a socialist agenda to demolish our cherished destiny," Trump said.


"Your vote will decide whether we protect law-abiding Americans, or whether we give free rein to violent anarchists, agitators and criminals who threaten our citizens … This is the most important election in the history of our country. 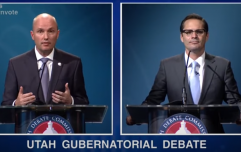 END_OF_DOCUMENT_TOKEN_TO_BE_REPLACED

"At no time before have voters faced a clearer choice between two parties, two visions, two philosophies, or two agendas," he said.

Trump sidestepped the distress caused to the nation by the police killings of George Floyd and Breonna Taylor, and also the recent shooting of Jacob Blake and instead focused on the “anarchists, agitators, rioters, looters and flag-burners".

As things stand with just under 70 days until the election, Biden holds a single digit lead over the sitting president in most opinion polls.

Biden himself accepted the Democratic nomination last week and while he did criticise Trump in his speech, he had avoided mentioned the US President by name.

“When Donald Trump says tonight you won’t be safe in Joe Biden’s America, look around and ask yourself: How safe do you feel in Donald Trump’s America?” Biden wrote.