US president Donald Trump is continuing to voice his frustration with what looks increasingly like his defeat in the presidential election, with opponent Joe Biden now in pole position in the race for the White House. END_OF_DOCUMENT_TOKEN_TO_BE_REPLACED

At present, Biden has 264 electoral college votes, just six away from the amount needed to secure the presidency. Trump, meanwhile, has 214.

Speaking on Wednesday night, Biden refused to declare himself the winner, though he did say that by the time the count would be finished, he was confident that he would be the victor.

"We are campaigning as Democrats, but I will govern as an American president," said Biden, who has already secured more votes than any other candidate in the history of US presidential elections.

Meanwhile, Trump has been airing his grievances from the comfort of his Twitter account, complaining about mail-in ballots which, as expected, appear to lean heavily in Biden's favour.

He tweeted: "Our lawyers have asked for 'meaningful access', but what good does that do? The damage has already been done to the integrity of our system, and to the Presidential Election itself. This is what should be discussed!"

His tweets, a number of which have been flagged by Twitter for misinformation, have also seen him claim victory in a number of states where it appears he has in fact not won. 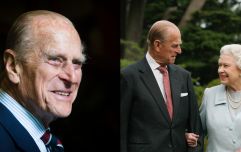 Prince Philip refused return to hospital in days before his death

END_OF_DOCUMENT_TOKEN_TO_BE_REPLACED

Earlier on Wednesday, Trump questioned why so many mail-in ballots were "so devastating in their percentage and power of destruction" towards his campaign, seemingly forgetting the fact he spent an enormous portion of the past few months denigrating absentee voting, and actively encouraged his supporters to vote on election day.

If you want to read more of Trump's ramblings in the aftermath of the election, click here.