US president Donald Trump has said he is happy to apologise for retweeting Islamophobic videos by the far-right Britain First group.

The US President said he didn't know the far-right group were "horrible, racist people" and admitted he shouldn't have retweeted them.

Pressed to say sorry for engaging with the Britain First tweets, Mr Trump said: "I don't want to cause any difficulty for your country.

"If you are telling me they're horrible people, horrible, racist people, I would certainly apologise if you'd like me to do that."

He claimed he was unaware the tweets he sent in November had caused such a huge backlash in the UK and said he didn't know who Britain First were.

The President said he did it because he is a "big believer in fighting radical Islamic terror." 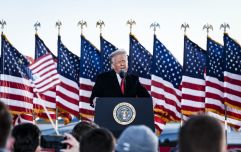 END_OF_DOCUMENT_TOKEN_TO_BE_REPLACED

The three anti-Islamic videos, which Mr Trump posted to his 43.5 million Twitter followers, included footage of migrants allegedly assaulting a Dutch boy on crutches. The "migrants" turned out to be born in the Netherlands, Dutch officials later confirmed.

But Trump denied he knew who Britain First were, and reaffirmed his fight against "Islamic terror" when Morgan asked him if he regretted the social media activity. END_OF_DOCUMENT_TOKEN_TO_BE_REPLACED

As Trump was walked into the room and was reunited with Morgan he declared: "Piers, I've missed you."

Piers announced the interview, which will be broadcast by ITV in its entirety at 10pm on Sunday, earlier in the day from Davos, where President Trump was attending the World Economic Forum.

In doing so he became the first sitting American president to meet the world's elite for 20 years, the last was Bill Clinton.

Today he will give a speech focused on trade and big business, telling reporters yesterday "we want peace and prosperity."

He also held back-to-back meetings with Theresa May and Benjamin Netanyahu, before reaffirming the "special relationship" during a photo call with the Prime Minister.

The President also said he was "looking forward" to speaking to special counsel Robert Mueller.

The freshly boiled ham has broadcast with Trump before, 20 or 30 times for CNN, receiving criticism for an interview style likened to brown-nosing.

Congratulations, Tubs. Great scoop. Will it also be the 1st international TV interview from inside the bowels of a US President? https://t.co/tyV8sHYbGL

The clown fish/anemone relationship is a little overplayed, but it might be a price worth paying. The world's media is now fixated with Morgan's interview - all it took was a year of public brown-nosing and a total surrender of dignity.