Dead mink, culled in Denmark due to a Covid mutation found in the animals, have begun rising from the one-metre-deep graves they were buried in.

Police say it due to the gases expelled by the decaying bodies, forcing them to rise above the soil to the surface.

"As the bodies decay, gases can be formed,” police spokesman Thomas Kristensen told Danish state broadcaster DR. "This causes the whole thing to expand a little. In this way, in the worst cases, the mink get pushed out of the ground."

Local authorities have attempted to stop the dead mink rising above ground by pouring more soil on top.

"This is a natural process," Kristensen expalined. "Unfortunately, one metre of soil is not just one metre of soil –it depends on what type of soil it is. The problem is that the sandy soil in West Jutland [where thousands of the culled mink are burried] is too light. So we have had to lay more soil on top."

There are also concerns that that drinking water could become infected, as the culled animals have been buried close to lakes and water reserves. 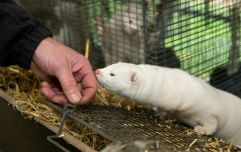 END_OF_DOCUMENT_TOKEN_TO_BE_REPLACED

Earlier this month, Denmark announced it would cull the country's entire population of minks - up to 17 million - after a mutation of the coronavirus found in the animals had spread to humans.

Danish health minister Magnus Heunicke said at the time that the mutation poses a threat to the development of a vaccine.

"Studies have shown that the mutations may affect the current candidates for a Covid-19 vaccine," Heunicke explained. "It is a threat to the development of coronavirus vaccines. That is why it is important that we make a national effort."

Mink infection has not been limited to Denmark. They have also been culled in Spain and the Netherlands after the infection rate grew in farms.

popular
Mikel Arteta suggests he has 'eliminated' the Arsenal mole
Make your own Bernie Sanders meme in any location with this website
Donald Trump's coronavirus vaccination plan was non-existent, reports say
People think Jennifer Lopez lip-synced at Joe Biden's inauguration
Teenagers offer free hand sanitiser to shoppers in Bradford, but it's super glue
Furious Dean Smith slams Man City opener decision after being sent off by Jon Moss
Michael Bisping reacts to Conor McGregor's dazzling $1 million watch
You may also like
Sport
Reece James shown red card for exchange with referee after England's loss to Denmark
News
Why does Sweden have so many COVID-19 deaths?
Sport
Christian Eriksen leaves interview when asked about Tottenham Hotspur future
Sport
James McClean hits back at Danes after pre-match comments
Sport
Christian Eriksen confirms he wants to leave Spurs for a new challenge this summer
Next Page