Why is Conor McGregor’s whiskey called Proper 12 and sponsoring UFC 229?

Last month Eire Born Spirits  announced the launch of Conor McGregor's Proper No. Twelve Irish Whiskey, or Proper 12 as it has been commonly called.

The UFC star is the founder, chairman and majority owner of the spirits company and you can expect to see its branding all over the place at UFC 229 as Conor McGregor and Khabib Nurmagomedov go head-to-head.

As for the drink, they're going with the name Proper No. Twelve because because he's from the Dublin surburb of Cremlin meaning that 12 is the area code in Dublin where McGregor grew up.

Launching the drink, McGregor said: “I come from a place called Crumlin, in Dublin 12. It’s a place dear to my heart. It’s where I learned how to fight; it made me who I am today. It’s a place I’m still very much a part of every single day of my life. So, that’s where the name came from. It’s proper Irish whiskey and twelve is my hometown.

He adds: “Growing up on the streets of Dublin 12, I learned the values of loyalty and hard work. I respect other Irish whiskeys, but I am coming in strong, with passion and with purpose. I am the founder of this company and I am going to give it my all."

How much does a bottle cost? 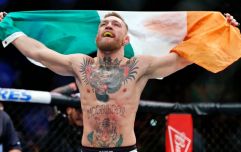 END_OF_DOCUMENT_TOKEN_TO_BE_REPLACED

McGregor said: "This donation plan will be in operation all over the world. "These are the men and women who run into buildings while everyone else is running out. They are our real life heroes – Proper Heroes."

Why is the Proper 12 logo everywhere at UFC 229 and is it a sponsor?

As Nurmagomedov puts his UFC lightweight title on the line against McGregor, it is likely you will be seeing a lot of the whiskey's logo as UFC president Dana White has said it is an official sponsor of the fight.

How can I watch the fight?

Unless you managed to get tickets for the T-Mobile Arena, you'll be watching on BT Sport. BT Sport continues to hold exclusive rights for UFC events in this part of the world until next year, when the coverage will shift to online platform Eleven Sports.


popular
What is 'Everton'? A series of questions, answered
THE JOE FRIDAY PUB QUIZ: WEEK 174
Tickets for UFC London are about to go on sale
Roy Keane is angry at everything bar his own tedious punditry
QUIZ: Identify which European clubs these 20 badges belong to
QUIZ: Name the English Football League clubs beginning with the letter ‘B’
How will Liverpool's new Nike shirts look next season?