Their faces were blank

National Rifle Association leader Wayne LaPierre seemed completely unaware that a comedian at his recent conference was mercilessly trolling him and his "thoughts and prayers" for the Texas massacre victims.

END_OF_DOCUMENT_TOKEN_TO_BE_REPLACED

Following the horrific mass shooting in Texas that killed 21 people - 19 of whom were kids - the NRA held a conference at which firearms were banned.

The irony was seemingly missed on them though. In attendance were Jason Selvig and Davram Stiefler, known on social media as The Good Liars - a comedy duo famed for their unique approach to political coverage.

We spoke directly to Wayne LaPierre at the NRA Convention and thanked him for all his thoughts and prayers. pic.twitter.com/EfdDrgD4Af 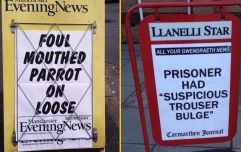 New TV series to track down best local news stories... but none of them will rival these

END_OF_DOCUMENT_TOKEN_TO_BE_REPLACED

You may recognise the men from TikTok, where they regularly troll right-wing supporters at various rallies across the US. However, Selvig and Stiefler were after a big fish on Saturday, having managed to snag some speaking time at the conference.

"I am sick and tired of the left-wing media and frankly, people in this room today, spreading misinformation about Wayne LaPierre," Selvig said.

"Whenever there's a mass shooting, they all say that Wayne LaPierre isn't doing enough to stop these mass shootings and even implying that LaPierre has played a part in making it easier for these shooters to get guns, to get weapons."

Fuck me, this is brutal. And they didn’t even realise they are having the absolute piss ripped out of them. https://t.co/98n8tFc57q 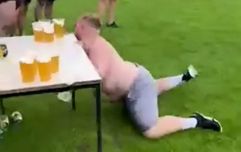 END_OF_DOCUMENT_TOKEN_TO_BE_REPLACED

Selvig continued to state that "under Wayne LaPierre's leadership", the NRA had provided "thoughts and prayers to the victims."

My thoughts and prayers, and prayers and thoughts, go out to this guy for one of the best droll trolls of all time. https://t.co/rwprewfwQZ

The video has seen an enormous amount of attention online, where one fan wrote: "Hysterical!!! LaPierre looks completely perplexed."

📢 Take a listen. Delivered with rapier precision. Wayne LaPierre head must still be spinning following this 90-second evisceration delivered so skillfully #thoughtsandprayers are not enough https://t.co/Kf7xlfIXcv

"Trumpers are so dumb they don't recognize when they're being mocked," another said.