Climate change activists have been protesting all week

Campaign coordinator for Extinction Rebellion Robin Boardman walked out of an interview live on air with Sky News' Adam Boulton. 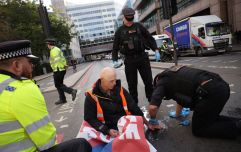 END_OF_DOCUMENT_TOKEN_TO_BE_REPLACED

Boulton called the climate change activist group "a load of incompetent, middle class, self-indulgent people who want to tell us how to live our lives," during the interview on Wednesday afternoon.

"Millions of people are going to starve," replied Boardman, "starting with those in Africa. We are seeing the effects it is having right now."

"If we face another hot summer this summer, another El Nino effect, we are going to see the effects right here in the UK."

He then got up out of his chair and walked out of the interview.

Some people on Twitter, including Owen Jones, pointed about that Adam Boulton went to the prestigious Westminister School, yet seemingly used "middle class" as an insult.

Also, if I was Adam Boulton and educated at Westminster School, one of the most prestigious public schools in Britain, I might go easy on denouncing others for being "middle class"?

Police have made nearly 400 arrests in London overExtinction Rebellion's recent protests, and three people have been charged over disruption to a DLR service at Canary Wharf.

Cathy Eastburn, 51, from Lambeth, south London, Mark Ovland, 35 of Somerton, Somerset, and Luke Watson, 29, of Manuden, Essex have been charged with obstructing trains or carriages on the railway by an unlawful act.