'Can I get my coat?' Chilling arrest footage of woman on trial for stabbing husband

The trial is still ongoing

Footage of the woman who allegedly stabbed her husband to death shows her stood in her pyjamas as police arrest her for murder.

Read the initial report: Woman who allegedly stabbed husband told 999 handler he was 'total s**t who deserved it'

Talking calmly to the police, 66-year-old Penelope Jackson explained why she stabbed David Jackson, 78, in their home in Berrow, Somerset in February 2021.

Her almost blasé demeanour is chilling to watch as she makes statements like: "If there's any luck you'll be too late" and "I should have stabbed him a bit more".

You would think that someone in the process of being arrested might be a little more distressed but Jackson seemed more concerned with retrieving her coat and slippers.

The video shows Jackson stepping out willingly with police officers at 9.25 pm and desperate not to save her husband - but to get her coat. 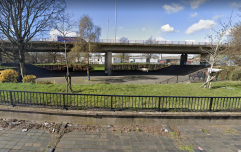 END_OF_DOCUMENT_TOKEN_TO_BE_REPLACED

"Can I get my coat on? He's on the kitchen floor," she requested.

"At this moment in time if you could just listen to my colleague... under arrest on suspicion of attempted murder," the officer replies.

After insisting that it wasn't attempted, Jackson asks for her coat once again.

A police officer asks for Jackson to bear with her but the alleged attacker is eager to get her coat.

"With any luck you'll be too late," she says, before asking once again if she can retrieve her coat.

Penelope Jackson, who is accused of murdering her husband David at their Somerset home in February, said she “should have stabbed him more” as she was arrested, a court has heard. pic.twitter.com/KzgEit0Jb7

"Right, get the ambulance here pronto. We need CPR," one officer calls, to which Jackson replies: "Oh don't no no no please don't. Should have stabbed him a bit more."

Before having the police car door closed on her, Jackson quips: "I know what I've done. And I know why I've done it and if I haven't done it properly I'm really annoyed."

Appearing in Bristol Crown Court on October 19, Jackson says she stabbed him after becoming "petrified" by the abuse he had subjected her to for years.

She continued to say she "walked on eggshells" and "lived with a knot in my stomach".

"I didn't know if I was waking up to nice David or nasty David," she continued.

The judge authorised the release of the 18-minute emergency call which her late husband had made himself while bleeding on the floor.

"He is in the kitchen bleeding to death with any luck," the defendant can be heard saying.

She continued: "I killed my husband because I've had enough. I might go and stab him again.

"He threatened me before, but he's not threatening me now."

She told the jury that her late husband was abusive, jealous and cruel.

"He was so jealous. He was so secure in some parts but so insecure in others that he thought I would pack my bags any minute and rush off with another person. I never gave him reason to think that.

"I wanted to reassure him so I tattooed 'property of David John Jackson.' I wanted to stop the constant jealousy and unfounded 'what are you going to do?' All the things he was feeling, I felt it would persuade him."

She continued: "No-one would to go out and see me with that printed on my bum. He was very pleased and thought it was a very nice Christmas present."