A kid, barely old enough to be left alone in the house without adult supervision, is football mad. For as long as he can remember, it has been the centre of his universe. Any spare moment of his young existence is spent either watching or playing the sport he loves with all his heart. Each stone or stray Coke can is a ball, and every chair or bench a goal. 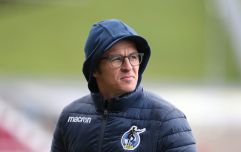 END_OF_DOCUMENT_TOKEN_TO_BE_REPLACED

He's pretty good too. Constantly mimicking his heroes, he has the ceaseless energy, bright-eyed enthusiasm, and the natural talent to shine amongst his peers. And he's never without a beaming smile. For him, a ball at his feet and a young pal to beat is his idea of heaven. The biggest trauma of his day is being called in when the light fades.

He gets noticed by an actual professional club and invited to train with them. It's the most amazing thing that has ever happened to him, and he could not be happier; everyone in the family is so incredibly proud of him. This could be the start of the rest of his life. There's a small but very real chance that he could actually play football for a living.

Pleading with his mum for the latest football boots, shinnies and replica kit pays off. There is something about wearing the same coloured footwear as his favourite player that makes him play better. Dropping him off to train at the club's state-of-the-art facilities, dad has some important advice to impart to his little superstar.

Always listen. Always work really hard. You might be the best player in the school playground, but so is each and every kid here. Do everything you're told, and don't answer back. These coaches are here to help you, to make you better. If you impress them, and do everything they say, the sky is the limit. You could even make it one day.

The young lad doesn't need telling. This is all he has ever wanted, and he's ready to do anything it takes. He loves everything about it. Playing on perfect pitches with freshly cut grass; going through training drills just like the players do on telly; even the changing rooms look and feel like the real thing. He never wants this to end. He'll work double-hard.

And then it happens. The horribleness starts. And his simple, happy life is shattered into little pieces.

He shouldn't tell anyone. He can't tell anyone. He better fucking not tell anyone, or else. It's a 'little secret' and it's nobody else's business. Suddenly, each car journey to training is filled with teary-eyed dread and panic. He doesn't want to go anymore. He doesn't like it. His love of football is now infected with a dirty poison that he is told is his fault.

END_OF_DOCUMENT_TOKEN_TO_BE_REPLACED

Every week is the same, and there's no escape. The adult he has been told to listen to is telling him to do things, and is doing things to him that he doesn't like. He doesn't understand what's going on but knows it's really wrong. He's worried that he'll get in big trouble for doing it too. Every night and day it ties his stomach in knots and makes him feel sick.

At home, his mum and dad have noticed a difference in him. They ask what's wrong but he can't tell them. Nothing is wrong. Everything is fine. He gets told off for having a face on all the time and being a moody little so-and-so. Dad doesn't appreciate his harsh tone when repeatedly questioned what's up. Mum gets upset and says she wants her happy boy back.

He cries when he's on his own. It makes him so sad. He is desperate to tell his mum whilst she's cuddling him, but knows that he can't. He can't tell anyone - not his teachers, not the other coaches, not his parents, and definitely not his friends. It's their little secret. He just has to close his eyes, quieten his sobbing, and get used to the horribleness.

Football isn't fun anymore. Nothing is fun anymore. A young boy who was happy and energetic and playful and cheeky is now an introverted, blank-eyed ghost of the kid he was. His life is now full of the type of pressure and stress that no adult should have to endure, never mind a skinny little youngster. One man has ruined his whole life forever.

The truth is I've got no fucking idea what it must be like. It really upsets me just thinking about it. My mind immediately turns to the young kids in my family and even the half-thought of anything like that makes me want to cry with anger. How does a child deal with that? How does an adult comes to terms with what happened to them in their youth?

END_OF_DOCUMENT_TOKEN_TO_BE_REPLACED

Who knows how deep the cancer of paedophilia in football runs. Let us hope it is 'just' a few terrible but isolated instances, whilst knowing it's almost definitely not. What we do know is that each and every person who somehow finds the courage to open up about their experiences is a hero. They are showing untold bravery and strength.

If it helps others to come forward and deal with the pain, if it leads to the monstrous perpetrators facing justice, and if it stops any more young lives being destroyed in such a devastating way, it is so worthwhile and truly live-saving. The likes of Andy Woodward, Steve Walters, Paul Stewart and David White deserve all the praise in the world, and all of our gratitude.

The NSPCC have launched a free helpline to offer support to anyone who has been sexually abused in football as a child. You can call at any time, 24 hours a day, on 0800 023 2642. Further information can be found here.