The article seeks to create a treaty, similar to that of post-World War Two

Boris Johnson has joined over 20 world leaders in signing a “joint article” calling for a pandemic treaty, which draws parallels between the 2020-2021 Covid-19 pandemic and World War Two.

END_OF_DOCUMENT_TOKEN_TO_BE_REPLACED

Dr Tedros Adhanom Ghebreyesus, head of the World Health Organisation (WHO), is also a signatory.

The article describes the pandemic as a “stark and painful reminder that nobody is safe until everyone is safe”, and has been published in media outlets across the world, including the Daily Telegraph in the UK, and El Pais in Spain.

It seeks to create a treaty similar to that of post-World War Two, to ensure international cooperation on future pandemic threats.

The world leader signatories say they are “committed to ensuring universal and equitable access to safe, efficacious and affordable vaccines, medicines, and diagnostics for this and future pandemics.”

A key aim outlined in the document is dispelling "the temptations of isolationism and nationalism and address the challenges" which it describes as only being achievable with "the spirit of solidarity and co-operation.”

This is the sentiment emphasised throughout the letter, using language such as: “when Covid-19 has exploited our weaknesses and divisions, we must seize this opportunity and come together as a global community for peaceful cooperation that extends beyond this crisis.”

END_OF_DOCUMENT_TOKEN_TO_BE_REPLACED

The letter says the treaty seeks to “foster an all of government and all of society approach, strengthening national, regional, and global capacities and resilience to future pandemics.”

This comes after attempts to cool tensions between the UK and the EU following threats of export bans on the vaccine to the UK by Brussels, criticised by British foreign secretary Dominic Raab as "brinkmanship".

The situation has become so fraught that Italy have been found halting exports of meningitis vaccines in fear that vaccine companies were secretly sending Covid-19 vaccines to the UK.

And outside the vaccine politics of Europe, inequality in vaccine distribution is stark.

Only 0.1 per cent of vaccine doses have been rolled out in low income countries globally, while wealthier countries like the UK, US and Israel are getting ready to vaccinate younger and less vulnerable populations domestically. 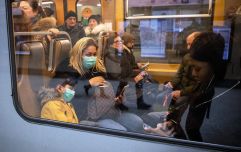 END_OF_DOCUMENT_TOKEN_TO_BE_REPLACED

This month, Dr Tedros Adhanom Ghebreyesus described the situation as getting "more grotesque every day", and criticised countries for vaccinating less vulnerable groups "at the cost of the lives of health workers, older people and other at-risk groups in other countries."