It is actually the zoom meeting of Handforth Parish Council. 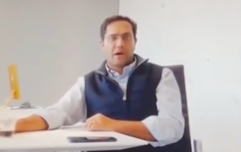 END_OF_DOCUMENT_TOKEN_TO_BE_REPLACED

Like many things in the last year or so, local council planning meetings have moved online due to the coronavirus. Normally they would only be of interest to people in the local area being discussed - and even then, only the most hardcore local politics geek would actually sit through them.

But this clip from Handforth Parish Council is something different. It all kicks off in the meeting, with members screaming at each other, and being thrown out of the Zoom call.

i’ve never missed in person meetings more than i did watching this parish council meeting descend into chaos pic.twitter.com/I75zi1fIK5

Clips are being shared on Twitter, with Clerk Jackie Weaver quickly becoming an internet folk hero on the level of the "Enjoy The Money" guy from Come Dine With Me.

Jackie Weaver has been trending on Twitter, along with Handforth Parish Council itself.

The meeting took place on December 10th last year, and was hosted on the Cheshire council website. Just think, this dynamite of content has been sitting online for nearly two months, without anyone noticing.

Of course, we now have all the memes incoming.

"I was once booted off a Parish Council Zoom meeting by Jackie Weaver, for telling her she had no authority". pic.twitter.com/WpIAPNcxIG

And now celebs are even tweeting about it.

It’s like if Scorsese had directed the Vicar or Dibley. ?? https://t.co/dEFQnOleEB

Watching this has made my night. Who needs a Netflix subscription when you’ve got Handforth Parish Council zoom meeting! ? Enjoy... https://t.co/EpttMBcCHX