This hasn't worked out quite as either the Sun or Piers Morgan had hoped.

The whistleblowing operation dubbed 'Football Leaks' which disclosed details of personal emails from David Beckham to his chief public relations adviser Simon Oliveira caused something of a furore on Friday night/Saturday morning.

The story was shared across Europe by the likes of L'Equipe, before the Sun and Piers Morgan decided to take advantage of the story to drive the knife into the Manchester United legend. They branded Becks 'disgraced' and 'repulsive'.

But the public weren't having any of it and fought back. Certainly Morgan's claim that it would completely change the perception of Beckham was way off the mark. Rather Piers was criticised for being so obviously excited to muddy the ex-England captain's name.

Now Beckham's representatives have responded with the following statement, as published by Metro:

'This story is based on outdated material taken out of context from hacked and doctored private emails from a third party server and gives a deliberately inaccurate picture. 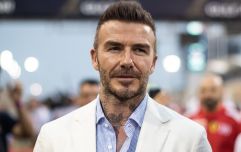 END_OF_DOCUMENT_TOKEN_TO_BE_REPLACED

'David Beckham has given significant time and energy and has made personal financial donations to the 7 Fund and this commitment will continue long term.

'Before establishing the 7 Fund, David had supported UNICEF and a number of other charities over many years, including donating his entire earnings from PSG during his time playing there.

'David and UNICEF are rightly proud of what they have and will continue to achieve together and are happy to let the facts speak for themselves.'

popular
Scarlett Moffatt Discovers ‘30% Rain’ On Weather App Doesn’t Mean Chance of Rain
Adam Sandler has officially greenlit Happy Gilmore 2
TOWIE star Mark Wright is officially the worst player on FIFA 21
Stevie Wonder to move to Ghana permanently due to racism in the USA
Man Utd youngster Shola Shoretire released by Man City for training with Barcelona
After Life season three to start filming soon, Ricky Gervais confirms
Alisson Becker's father passes away after drowning in Brazil
You may also like
Sport
David Beckham says Phil Neville got Miami job on merit, not because they were friends
Sport
David Beckham earns more from featuring in FIFA than he did as a player
Sport
Gonzalo Higuaín misses penalty and scraps opposition on Inter Miami debut
Sport
David Beckham seems to have confirmed the new Man Utd third kit
Sport
What really happened when Sir Alex kicked a boot at Becks' head
Next Page