The baby seen being lifted over a barbed wire fence at Kabul's airport has now been reunited with their father. 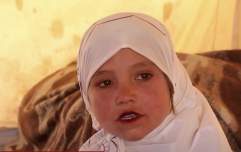 END_OF_DOCUMENT_TOKEN_TO_BE_REPLACED

The video, which has now gone viral, was posted by human rights activist Omar Haidiri. It depicts a young baby being lifted over a barbed-wire fence in the hopes of paratroopers taking them from Kabul. However, US paratroopers have now announced that the baby has been reunited with their father.

The Marine Corps' Major Jim Stenger has confirmed that the baby is now 'safe' and has been reunited with their father.

In a statement to NBC News, Stenger said: "I can confirm the uniformed service member depicted in the video is a Marine with the 24th Marine Expeditionary Unit.

"The baby seen in the video was taken to a medical treatment facility on-site and cared for by medical professionals.

"I can confirm the baby was reunited with their father and is safe at the airport.

"This is a true example of the professionalism of the Marines on site, who are making quick decisions in a dynamic situation in support of evacuation operations."

This horrific photograph
(📷Omar Haidari via @Reuters) should haunt Joe Biden & Boris Johnson for the rest of their terms in office. A baby passed up by frantic family to US military at Kabul airport. Imagine how desperate you have to be to do this? What fate awaits that child? pic.twitter.com/Xej2NtBCSe

In a press briefing on Friday afternoon, Pentagon spokesman John Kirby said the baby wasn't being passed over to Marines to board a flight. Instead, the child was only handed over to the Marines to receive medical treatment in a 'humane act of compassion'.

Stenger continued: "The parent asked the Marines to look after the baby because the baby was ill. The Marine you see reaching over the wall, took it to a Norwegian hospital at the airport. They treated the child and returned the child to the father. 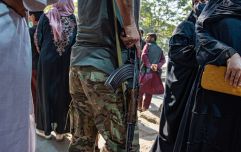 END_OF_DOCUMENT_TOKEN_TO_BE_REPLACED

"The baby was returned to its father. I don't know where they are now. Obviously, we have a responsibility to return a child to the parent. I don't know who the parent is, if they're an SIV applicant. It was a humane act of compassion by the Marines."

popular
Scotland international rugby star Siobhan Cattigan dies aged 26
Woman wins millions after suing mum's GP for allowing her to be born
A definitive ranking of every swear word from worst to best
Elon Musk shares 'evidence' we are actually living in a simulation
Here's how to see who's been taking screenshots of your Instagram Stories
Nasa warns 'concerning' asteroid will break into Earth's orbit in a week
Omicron symptoms: What you should be looking out for
You may also like
News
Bodies hang from cranes as Taliban restore public executions
News
All-female cabin crew dismissed by new Taliban bosses in Afghanistan
News
Wife of Marine killed in Kabul gives birth and names daughter after her father
News
Afghan teen who feared UK would deport him killed himself
News
Taliban hides female students behind curtain as Afghan universities return
Next Page